Digital artist Cao Fei reflects on the impact of the rapid and chaotic changes in Chinese society on the sense of self, human relationships and the world through various media: 3D films, films multilayered with VR and AR and photography, blurring the lines between human reality and virtual fantasy. 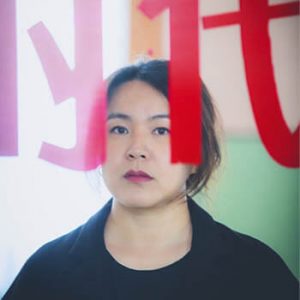 Cao Fei (b. 1978, China) is a New Media artist living in Beijing. Her digital artworks are observations and reflections on the rapidly changing landscape of Chinese society.

Fei’s works mostly explore the themes of the modern world’s obsession with technology and its impact on people’s lives, urbanisation (past and present), life in factories, the changing manufacturing processes in China, particularly since the introduction of VR technology, as well as the gap between virtual and real lives. Her very first major work Whose Utopia? was created in 2006 and is a seminal piece that explores all of these themes and sets the precedent for the tone and themes in her subsequent artworks across media.

Fei’s new media artworks include installations, photography, film and 3D animation, and have been exhibited at various locations around the world. She often creates different versions of the same artwork using different media to allow the viewer to enjoy a multidimensional experience. Fei uses digital, VR and AR technologies to create alternative realities and fictional cities where the viewer is invited to become a part of the artwork itself. 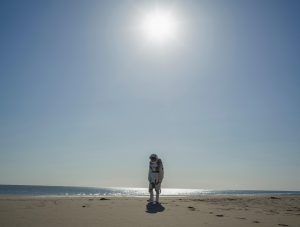 Fei’s latest works revisit characters from her previous films, as she has created additional layers by incorporating VR and AR technology capabilities to them. By adding these to her films, she immerses her viewers in the stories and invites them to become actors of the digital artworks themselves.

Fei has two upcoming solo shows with these latest VR and AR enhanced works. The first, Cao Fei, is her first solo exhibition at Sprüth Magers in Los Angeles from 8 October 2021 to November 2021. VR and AR enhanced versions of her feature films Nova (2019) and Asia One (2018) will be screened and photographs related to previous projects such as Haze and Fog (2013) and La Town (2014) will be displayed.

The second exhibition, Cao Fei, Supernova will open at the MAXXI – Museo nazionale delle arti del XXI secolo in Rome from 16 December 2021 to 8 May 2022. Haze and Fog (2013) and La Town (2014) as well as Nova (2019) and VR work The Eternal Wave (2020) will also be screened. Isle of Instability (2020), which was first exhibited in Shanghai, will be on display and is an installation in which Fei explores the psychological repercussions of the pandemic.

Although a lot is essentially films, Fei sees herself primarily as an artist. That said, she is also mostly inspired by film directors rather than artists. Notable directors that have influenced her work include Roy Anderssen and Peter Greenaway, who she says helped her learn more about creating a narrative in her artworks. The level of imagination in their films fuelled and encouraged her own creativity.

Fei has since added digital technology to create her artworks and express herself. Going digital “was a natural evolution of her art and her artistic journey complementing other mediums she uses and allowing her to infinitely create a world beyond reality”.

China Tracy is Cao Fei’s alter ego, who was alive from 2006 to 2011 in Second Life (SL), acting as her interpreter and guide to understanding her art, especially her digital artworks, of which she is the key creator. Fei describes her vision of Second Life as “a virtual utopia called China, where the best of Communism and capitalism intermingled in a futurist landscape carved from free expression and electric dreams of abundance”.

In 2007, China Tracy designed and created virtual island RMB City and film Trilogy i.Mirror (more below). Fei resurrected her in 2021 and she has now dropped her first NFT Einstein on the Beach – Chasing the Moon / 沙滩上的爱因斯坦–追月.

The avatar China Tracy was resurrected from SL and has authored Einstein on the Beach – —Chasing the Moon / 沙滩上的爱因斯坦–追月, which is her very first NFT. In this digital artwork, the China of 2021 has come back into this world as a cosmopolitan warrior/cosmonaut who finds a world markedly different from the one she first inhabited from 2007 to 2011.

The world China discovers in 2021 leaves a lot to be desired. There’s a lot of progress in science and technology, however, humanity, and the world, seem battered and bruised by climate emergencies, the covid-19 pandemic, failures of democracy, and unprecedented economic inequality. She tries to escape from this place of disappointment to the Moon, but to no avail and ends up staying in the current world. The melancholy  of the story is heightened by the evocative background music that In an interview with Kanon about this artwork, Fei says she was inspired by the music of Philip Glass. “his (Philip Glass) modernist minimalism conveys a bygone epoch’s anticipation of the coming future.”

Nova comprises a feature film, as well as AR and VR enhanced versions of the film, a book and a series of photos.

The film explores the relationship between a father and a son, Nova. It is set in China, from the 1950s onwards, the backdrop is the beginnings of the electronics industry which coincided with the founding of the People’s Republic of China.

Fei tells us the story of China as she explores socialism in both China and Russia, as well as the relationship between Chinese socialism and science fiction. For Fei, Chinese sci-fi is quite different from that of the Western world and its development, with Chinese socialism is quintessentially Chinese. The pop culture images and storylines are shaped by national priorities, namely the Communist party’s priorities. Fei wanted to use and reflect the aesthetics of this movement, and explore its connection with a wider Chinese identity.

“My goal in creating Nova was to create an artwork that has true Chinese style to it”. The film can be viewed as a documentary, but as she added creative, sci-fi and VR elements to create the city of Nova, Fei was less restricted than if she were just making a documentary and was able to go beyond factual description to bring her story to life.

The varied media she used to create Nova are complementary, but offer the audience a different experience. Photos capture single moments of the story giving off a mysterious vibe, while the AR and VR versions of the film offer a more immersive experience and invite the viewer to connect with the main character, Nova.

RMB City (2007) is a virtual urban environment that China Tracy (Cao Fei) built within the digital realm of Second Life. It was the artist’s very first digital artwork. She was fascinated by the world of SL and in this work, she is both the creator as herself and a participant as China Tracy, who acts as a guide, philosopher and tourist.

The city was built for the global virtual community. However, in spite of SL’s popularity around the world, with famous countries and cities visibly represented, it lacked recognisable Chinese landmarks that would engage and resonate with virtual participants from China. This barrier to Chinese users’ engagement fuelled Fei desire to create RMB City in the way she did.

This artificial city island is a collage of landmarks, urban developments and Chinese traditional landscape painting. In creating the world, Fei explored the multiple contrasts, between past and present, humans and nature, as well as the Asian and Western architectural designs that she had grown up with. The result was a city with aesthetics deeply rooted in the Asian way of thinking but that also absorbed the fluidity of a world in which cultures have mixed and diverged over time.

As an artist, Fei Cao perceives the world in various interesting ways. She once spent years with her team in Second Life, a virtual dimension, carefully considering if that world was real, then what it would be for city construction, human policies and so forth. How can female artists express their ideas from different angles? Fei Cao responded with an answer beyond gender, through role-play and factory creation in the real world, Second Life in a virtual dimension, and the cinematic haze.

Fei recently won, in September 2021, the Deutsche Börse Photography Foundation Prize  Award (2021), for her solo exhibition Blueprints (2020) at the Serpentine Gallery in London. This was another award added to the many she has won over the years. These include the Chinese Contemporary Art Award (CCAA), Future Generation Art Prize, Pinchuk Art Centre, Kiev, in Ukraine, Cuenca Biennial, Cuenca in Ecuador, to name a few.

Fei has also participated in juries and selection committees, for the curatorship of the 8th Berlin Biennale (2014), the Bonnefanten Award for Contemporary Art (2016) and the Hugo Boss Asia Art Prize (2019).