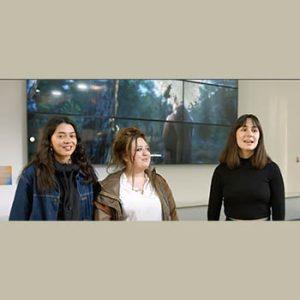 Keiken was founded in 2015 by Hana Omori, Isabel Ramos and Tanya Cruz, who come from mixed diasporic backgrounds (Mexican/Japanese/European/Jewish). Keiken gets its name from the Japanese word for experience, a core value in their practice which they approach from multiple vantage points and media. Keiken are focused on building new worlds through film, gaming, blockchain, New Media and Digital Art to question how bodies and value systems can be reconfigured in these speculative futures. They bring a mystic exploration of the womb and semiotics to the chromed aesthetic of XR, rebelling against the corporatisation of the metaverse.

Keiken will be taking part in the major new exhibition Among the Machines at the Zabludowicz Collection*, London from the 24th March 2022. Among the Machines brings together thirteen international New Media and Digital Artists across different generations to explore how machines, data and non-human entities can co-exist with and within the body, speculating on a stage of evolution beyond the human.

* The White Pube’s call to boycott the Zabludowicz Collection more info below.

Tanya, Hana and Isabel all completed a BA in Fine Art (Hons) at Falmouth University, England.

Player of Cosmic ༄ ° Realms seeks to re-frame the dialogue around gaming and the metaverse, proposing a more integrated, holistic approach to VR where empathetic technologies take precedence. In Bet(a) Bodies, Keiken invites viewers to wear their haptic womb-artefacts, which emit a fleshy, alien blue light, and listen to the calls of bats, dolphins and whales through headphones. Alongside Bet(a) Bodies is the CGI film series The Life Game, which the viewer can interact with via an iPad. Keiken transported tonnes of salt to the gallery for Player of Cosmic ༄ ° Realms, sculpting an otherworldly desert landscape studded with duvets and LED lights.

Beginnings and endings are central themes in Keiken’s work, and The Life Game and Bet(a) Bodies play with how our approach to technology and the metaverse might change if we saw it as synthesising something new within us, instead of mere external tools. The act of wearing a womb prompts us to reflect on what we want to invite into ourselves and our bodies, and whether there is room for the more-than-human (and more than profit) in that.

Keiken’s wisdom tokens function as collectable pieces of Digital Art that players can download at the end of gameplay, including an animation of an orchid floating in water entitled “Cosmos-centric bowl” level “precious,” and a blue flaming cherub called “posthumanbaby” level “posthuman rare.” The moral questions that structure Wisdoms for Love 3.0 are like poetic assemblages, read-out to the player in different accents and languages asking questions like: “How would you like to contribute to the metaverse? Become a Human God, Become a Divine Mother, Or Stay on your Moral High Horse?”

Wisdoms for Love 3.0 is a world that stems from wisdom as currency. Instead of financial exchange to download your wisdom tokens, players must only enter a moral contract with the artists – shifting the focus from exploitative corporate models while picking out the founding ethics of technology as exchange.

In collaboration with Israeli dancer Naama Ityel, Metaverse Womb explores the pregnant body across time and space. Motion-capture technology renders Ityel’s ritualistic dance in real-time, creating three avatars that mirror the movement of the fleshy body in 360 video. The first avatar symbolises Ityel and her place in the present moment; the past is embodied as her grandmother; and the future is depicted as a hybrid, beyond-human being, beckoning the child to come. The pregnant body is one doubled, and Metaverse Womb emphasises how the body extends beyond bounded singularity in both technology and time itself, presenting Ityel’s form as caught in a matrix of virtual futures and ancestral pasts.

Keiken are the winners of the Chanel Next Prize 2021-2022 and are the upcoming residents at Somerset House Studios, London.