From the dance of shamans to the dance of light with sound: Mária Júdová’s digital artworks invite you to contemplate a poetic digitalisation of human experience. 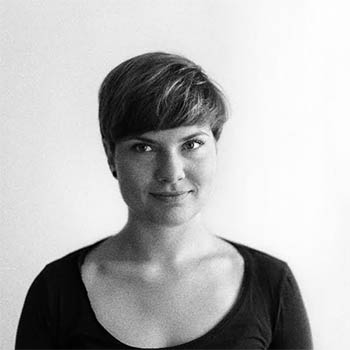 Maria Judova is a visual artist from Slovakia who probes the boundaries of the artistic potential of technology. Her work spans a wide variety of techniques from interactive installations to audio-visual performances.

Judova received her BA in Digital Media at the Academy of Arts in Slovakia and her MA at the Center for Audiovisual Studies in Czechia. As part of her education, she also took part in the Department of Installation and Performance at École de Recherche Graphique in Belgium.

Up until today, she has worked with renowned bodies worldwide such as the International Centre for Art and New Technologies in the Czech Republic; Choreographic Coding Lab in Germany; Rambert Contemporary Dance Company in England and Yamaguchi Center for Arts and Media in Japan. Her artworks have been presented and awarded by art organisations from Europe and Asia.

Currently, Judova is working on two projects. One is Inbetween, a performance that explores group tensions and remaps the spaces between individuals in a world of 24-hour connectivity and instant reactions. These have been intensified by climate change, not to mention the continuing pandemic. The other one is Earth, an audio-visual performance based on a recently released album, Earth, by Slovak born composer and singer Ivana Mer, that interweaves anthropological topics and the current geopolitical situation.

Júdová  takes part in choreographic coding research which has given rise to a new programming paradigm.

This intermedia performance merges dance, music, videography, and 360° interactive video adaptation. The dance performance is marked by Soňa Ferienčíková whirling on the stage in front of sizable screens that reflect Mária Júdová’s visual choreography of retouched photographic shots from personal and collective history. In this intermedia performance, the combination of spatialized sound, movement and digital imagery illustrate the history’s endless cycles, orbiting two different facets of human individual and collective existence: the personal and the political.

As suggested by the work, a caring, gentle and fragile individual can appear on the political stage of history as vengeful, hateful, even evil. A loving father who advocates slavery, an amorous couple committing mass murder. Family, friends, neighbours, ourselves: we are all faced with the threat of turning to monstrous violence against the other in a fraction of a second, face to face with the threat of history repeating itself.

Memory is deceiving, so is official history. Things are not remembered as they are lived, and when history is written it never really tells what happened. This way, the historical tragedies keep happening again and again.

To stop the historical recurrence of human suffering from the acts of humans, we have to question our beliefs and their origins in what we are taught to believe. But how to question the teachings of those who are dearest to us?

Everywhen is about collective recollection that throws light on the contradictory coexistence of personal and political aspects of individuals. It is about the cyclical aspect of time that keeps closing in on us, the endless return of the same violence and pain until we distinguish the personal from the political.

Dance is perhaps the most ancient art form that reconnects alienated humans with the world on a spiritual level. Feriencíková’s dance on the stage seems to impersonate the Gaia, the female personification of the earth who gives birth both to life and death.

This image becomes clearer in the three 360° interactive video adaptations which seem to capture the inner world of Gaia and digitalise her spirit. In the first adaptation, she appears as a life-giving and caring figure, whereas in the second adaptation, she is driven by violent and destructive forces. Together they tell the story of all the earthly forces that resonate within her. The third adaptation is the state of ecstasy where Gaia listens to herself, listens to the macro-universe and to all the micro-universes that manifest in her. Her mechanic whirling is uncannily mystic, connecting and maintaining the macro-and the microcosms in balance.

Everywhen is a digital poetry inventing spirituality in the digital realm and evoking the experience of the sublime by showing that you are part of something that extends beyond your imagination.

Kykeon is an immersive virtual reality experience that reimagines contemporary society through the lens of shamanism. It offers the chance to witness a new ritual that is born from ancient knowledge.

Kykeon is a Virtual Reality trilogy that throws light on contemporary society through ancient shamanic rituals. The trilogy brings forth the different metaphorical meanings of the mask, then and now. In ancient shamanic rituals wearing a mask connected the shaman to spirits. The shaman who wore the mask and so became the spirit or the bearer of the spirit was a medium between the world of the living and the spirits. The mask was a door that connected humans and nature as a whole, that brought back the sense of unity for the awakening of consciousness that created an abyss between ‘me’ and the world.

Inversely, today, a mask is the metaphor of the disconnection from the other, a disengagement. We hide behind masks in highly individualistic societies marked by solitude disguised as privacy. In this atmosphere, Kykeon looks back at ancient cultures to find a direction today and a path forward, to heal the society as shamans once did.

Kykeon offers a journey through the multiple stages of being – using multiple state-of-the-art techniques and combined technologies. A VR helmet will guide the audience into an imaginary spirit world of celestial mechanics and forgotten harmonics as once a mask guided the shaman. You can interact with these ancient forces and perhaps what has been forgotten will awaken in you as well, and for a while, you will become the shaman or the bearer of the shaman.

The Fatal Light Attraction performance is an audiovisual show realised in collaboration with Samuel Kerridge, an experimental music producer from Berlin, who creates the sounds, and a system of intense lighting surrounding him creates a sense of motion that acts as a counterpart to the music.

Samuel Kerridge is known for his sonic arsenal. Júdová and Boleslavský’s light design responds in real-time to the music and creates a dance choreography made of shadows.