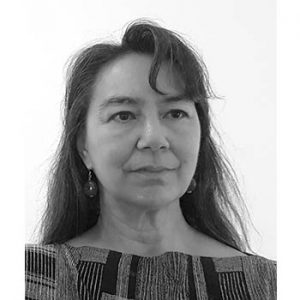 Tamiko Thiel (b. 1957) is a digital artist who works with an array of New Media techniques including  AR, VR, video installation, net art and digital 2D and 3Dprint.  She is fascinated by the interplay of space, place, the body and cultural identity.

After completing her Bachelor’s studies in Product Design Engineering, Thiel initially worked as a design engineer at HP, before returning to study Mechanical Engineering Design at MIT. During her time there, she spent much of her time in precursors to the Media Lab, exploring new visual techniques that blend Digital Art, technology and design. In the late 1980s, she achieved acclaim for her role as Lead Product Designer on supercomputers Connection Machine CM-1/CM-2.

She relocated to Germany in 1985 to complete a degree in Studio Art at the Munich Academy of Fine Arts, developing her practice as a New Media artist. Her career has spanned three decades, using the possibilities of Digital Art in inventive and inspiring ways. Notable projects include a collaboration with Steven Spielberg, Starbright World, AR interventions at the MoMA and Venice Biennale and Unexpected Growth, a digital installation, commissioned by the Whitney Museum in 2018 and is now in its collection. 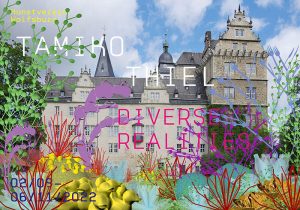 A big milestone to recognise decades of pioneering works.

Before her official ventures into New Media art, Thiel was already blending her expertise in technology with a sense for aesthetics. Connection Machine CM-1/CM-2 is shiny and futuristic, a revolutionary design generated when computers most commonly resembled ‘big grey refrigerators’. This caught the eye of Steve Jobs, who was so impressed by the minimal, functional aesthetic that he requested Thiel join his team at NeXT machines. In a twist of fate, she never received the offer as she had just moved to Munich to train as a digital artist. A CM-2 has since been acquired by MoMA NY.

This Digital Art work, produced in collaboration with artist /p, invites viewers to submit an image of their face to the control of deep fake software which then generates rapid photo/video manipulations. A full online version of the work, Go Fake Yourself! can be accessed through The Photographer’s Gallery. Thiel merges participants with political figures and celebrities, generating an uncanny image that combines your expression and movement with the words of others. In a frightening revelation of the possibilities of AI, images are readily manipulated, speaking phrases we have never uttered. An immersive version of the digital artwork, opened with the Artists Association in Haus der Kunst in Munich last year, surprising visitors with projections of themselves as Barack Obama, Greta Thunberg.

In an interview for Unthinking Photography, with curator Sarah Cook, Thiel describes her desire to keep people in the space of the ‘uncanny’. In the age of zoom calls and selfie culture, we have become hyper-aware of our own image, and our camera reflection seems somewhat inescapable. Yet, when our expression is layered with another, there is an odd disconnection between our movements and the words spoken.

The slightly artificial appearance is maintained deliberately by Thiel, never letting viewers fully control their own image. Thiel makes sure she asks for permission, allowing us to loan out our image and delete it at will. Yet, in the age of scandals over image mining for databases and CCTV, Thiel reminds us of the daily exchanges of our image we engage in without knowledge or hope of repayment.

Touching, Traces records Thiel’s reaction to the US presidential electoral debates, in intimate digital portraits of the finger prints and marks on her iPad’s screen. According to the artist’s website, they record her “frantic doomscrolling” during the 2020 electoral race. These marks grow in number each day, before being wiped away and reset. Writing emails and messaging friends becomes a physical connection, mediated by the iPad’s screen.

The initial optimism felt towards the end of Trump’s controversial reign as POTUS becomes fractured by the increasingly prominent social division and institutional racism in the US.  The subtle differences between each day act as clues to Thiel’s psyche. When did she feel more despondent, casually swiping for an update? Which events caused her to frantically swipe until her prints merged into an uneasy mass of anxiety?

You could compare these marks to the brushstrokes of an expressionist painter, wishing to record their most fundamental emotions. In the New Media Age, the canvas becomes a phone, the paintbrush, a finger on a touchscreen. This year may have left us feeling more disconnected than ever before but Thiel reminds us of the deep tactile attachment we hold to our phones and devices. Frustrated by physical distance, Thiel’s digital prints record the human longing for engagement and touch that remains.

Land of Cloud is a world far beyond our own, with plants that extend around us forming a lush canopy against a luminous purple sky. It is available as part of the Unchartered Territories–ImmersiVR, a VR rental platform from InVR by the Synthesis Gallery. This virtual reality work was produced by Thiel during an artist residency with Google Tilt Brush in 2017.

In an interview with EASTEAST, Thiel revealed her connection to the work of her German father, an architect. Fascinated with the flow between physical spaces, Thiel takes advantage of the boundless physical realm that can be created using New Media techniques. The Tilt Brush technology also enabled her to explore traditional art forms such as Japanese brush painting and calligraphy, which her mother, an accomplished calligrapher, taught her as a girl.

In this video demonstration, you can see how Thiel created the forest scenery for Land of Cloud. The artist engages her entire body to produce broad gestural strokes. Trees flow above the body, in wiry, curved shapes that defy gravity. The leaves resemble palms or bamboo shoots that gently drape down over the viewer. The plants look otherworldly, gesturing to a realm that is beyond earthly possibilities.

The digital space in Land of Cloud is filled with ghostly, white ‘deities’. Haunting whispering sounds become more audible as the viewer draws near. Listening closely reveals that these are quotes from the 2016 US electoral debates. Trump and Clinton alternately whisper their campaign slogans. The feminine and masculine voices contrast, one cooperative, the other militant. For all their differences, the similar core of the messages is also highlighted which creates a disturbing sense of synchronicity. The whispers are parroted variations on the American Dream, claiming we can work hard and succeed-whatever our circumstances. In 2021, this reality feels further from our grasp than ever before.

The ‘cloud’ referenced in the title invokes a sense of the sky and heavenly bodies while also reminding us of The Cloud, a data realm beyond our tangible reach. We are all wired in, worshipping public figures we have no physical connection to. The translucent figures sit in familiar poses, heads weighed down with ‘text-neck’ and gazes fixed on their devices. Even in the heavenly realm of paradise, there is an odd interiority, no matter the environment, figures become absorbed into the digital. 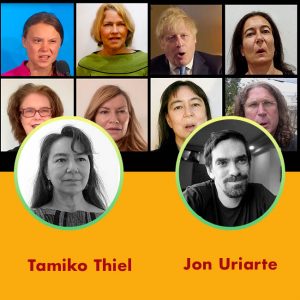 The talk focused on understanding how photography evolved with new technologies and what are the impacts of those images. 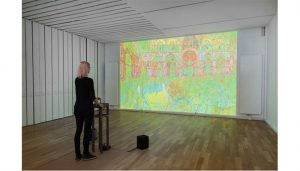 The Art of Breaking Boundaries: Digital Art at the Cutting Edge.

In 2021, My Identity Is This Expanse! created in collaboration with  @karolinamarkiewiczpascalpiron, has just won the Best Immersive VR Award at the Cinequest Film & Creativity Festival (San José, USA).

Thiel has received numerous accolades throughout her career as both product designer and digital artist. Thiel was the lead designer for the CM-2 machine, which won the Gordon Bell award for being the fastest supercomputer in the world. More recently she received the 2018 Visionary Pioneer Award by the Society of Art and Technology Montreal. Her project Land of Cloud, produced as an artist in residence for Google, was awarded the People’s Choice Award at the VRHam Virtual Reality Festival, in Hamburg. Thiel is currently working on digital commissions from the Goethe Institute, Montreal, the Film and TV Funds Bavaria and the Smithsonian Institution.

A co-production with Steven Spielberg, the Starbright World project was voted CYBEREDGE product of the year and was a finalist for the Smithsonian Award in Medicine. Her Digital Art has been exhibited worldwide, including Unexpected Growth, a 2018 commission for the Whitney in New York – now housed in its permanent collection. Thiel has participated in exhibitions across Europe, America and Asia, including at the Tate Modern, MoMA, ICA Boston, Bauhaus Institute and San Jose Museum of Arts.

Feb 2021, Lend Me Your Face! in Synthetic Corpo-Reality at Meet Centre, Milan, Italy. 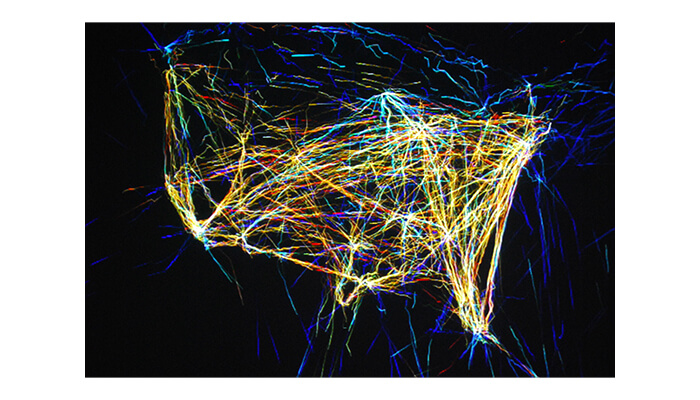 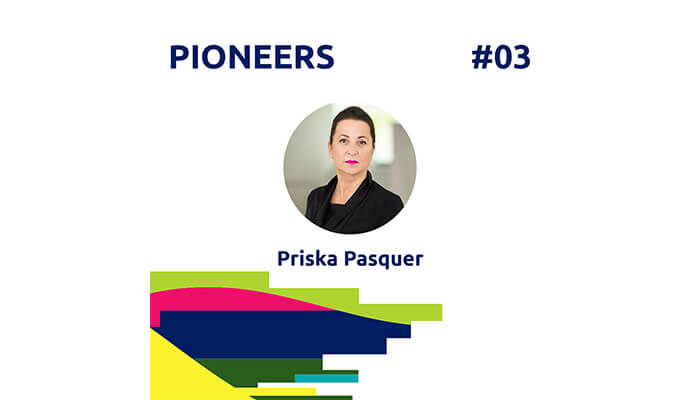