ASCII art was frequently the accompaniment to our email signatures or blog posts in the early 2000s, injecting a bit of whimsy into Microsoft Outlook. But where did ASCII art come from, and how have its artistic descendants managed to stay on our screens since the 1960s?

ASCII art is one of the earliest forms of digital art. ‘ASCII’ is the short form for the ‘American Standard Code for Information Interchange’. First published in 1963, the Standard encodes 128 characters, 95 of which are printable. The more creative among 60s computer users quickly started using these characters to create text-based visual art. By carefully arranging the characters (manually, using creative coding, or with image-to-text converters), artists could make printable digital images and designs. Necessity is certainly the mother of this invention: printers at this time usually lacked graphics ability, but ASCII characters provided a work-around, as they could be used in place of graphic marks. The continued use of coding characters to make art since this time means that ‘ASCII art’ is also now used to refer to text-based computer art more generally. 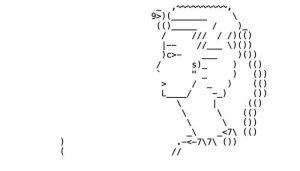 John Stachowicz, Queen of the Nile. ©Courtesy of the artist and the ASCII Art Archive

ASCII artworks range from the cute, to the detailed, to the meta, showing the enormous breadth of ASCII to convey visual meaning beyond code. More than hammering away at a keyboard, ASCII artists are typing pictures. This is something different to using letters and symbols as mere components of art; the ASCII symbols are both the material and the ‘point’ of the art. The ASCII symbols are made an end in themselves (rather than being used to produce a program or other output), pushing code to be more than a language, and rather a conceptual experiment. 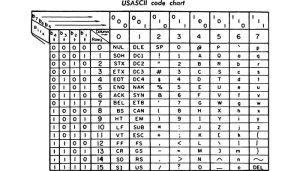 Computer Nude (Studies in Perception I) (1967) was one of the earliest ASCII artworks. Made by two engineers from Bell Laboratories – Leon Harmon and Ken Knowlton – Computer Nude was made using a transparency of a photograph of choreographer Deborah Hay. The transparency was scanned, with the visual information stored as a series of pulses, processed by the computer, and printed out as a drawing made up of symbols. Widely spaced multiplication and division signs make up the highlights of Hay’s arms as she reclines, while tightly bunched symbols make up her navel and one visible nipple. Much like in a pointillist painting, up close the symbols look like random little groups of shading. Zoomed out, they reveal a gently shaded and undulating human form – hard code turned soft through creativity.

The image was later displayed at an event organised by Robert Rauschenberg which sought “to bring modern technological tools to the artist for creating new art forms and fresh insights and viewpoints to the engineer for creating a ‘people-oriented’ technology’”. That ASCII had been created for a more practical purpose was by-the-by.  Combining its technical capabilities with the possibilities of artistic thinking allowed engineer-artists like Harmon and Knowlton to extend its relevance. 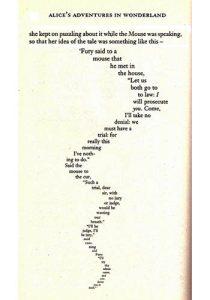 While ASCII art was very much the product of its time – a delightful use of new technology – its aesthetics and techniques are a continuation of a long tradition. Shaped poetry dates back to Ancient Greece (for example, Egg by Simias of Rhodes). The rise of the printing press allowed typography and shaped poetry to thrive – poetic synergies could be created between written form and content. Just look at Lewis Carroll’s winding, dangling poem The Mouse’s Tale in Alice’s Adventures in Wonderland (first published in 1865); a twee interweaving of linguistic and visual references, the poem is the tale of a mouse in the shape of a mouse’s tail. While shaped poems such as The Mouse’s Tale are susceptible to translation barriers (the aural similarity between ‘tale’ and ‘tail’ is of course not shared across languages, and changes in word length can also affect shape), ASCII art is based on a symbolic standard used internationally. This means that while it may not share all of the linguistic beauty of shaped poetry, its ability to convey visual artistic feeling is not limited by language.

A new dimension of language itself has evolved since the birth of ASCII, and artists continue to work with ASCII in new ways. ASCII art is all the more salient in today’s world, as the question ‘What languages do you know?’ becomes just as likely to elicit the response ‘Python’ as ‘French’. A contemporary ASCII artist, Julian Hespenheide creates hypnotic pieces that are dizzyingly detailed. compression of time (2022) uses ASCII symbols to show two jittering funnels resembling an hourglass. The image flickers and expands and detracts with a juddering flow, as one hourglass seems to change shape and size, creating a new vessel of time that consumes the previous one. You can watch the piece in an endless flow; it would perhaps be a good way to bring a soothing end to your night’s Instagram scrolling if it did not pull you into existential thoughts about time and life-beyond-time in the digital realm.

Emoticons made with ASCII symbols 🙂 have evolved into smileys ☺ and now into emojis. These evocative little Unicode playthings, like art made from ASCII symbols, often mean more than their code alone would suggest: see 🍑 and 🍆.  Developing out of ‘true’ ASCII art are pieces such as Emoji Wave (2022) by internet artist Ilithya. Stare at it long enough and let your eyes glaze over, and the images snake even more smoothly across the screen, becoming a homogenous, waving form. Oddly satisfying to look at, the vibrant tween-dream is made up of repeating lines of smileys and emojis. Included in the piece are the eyes emoji (peering to the left in a shifty or pervy leer), the taco emoji (not just a tasty snack, but often referring to female genitalia) and the rainbow emoji (bringing to mind gay pride). This combination of emojis – coupled with the streamlined, classic Wingdings smileys – illustrates how symbols made from code have developed both visually and in the meaning they carry. While traditional ASCII art can undoubtedly hold meaning, its use of the ASCII script (rather than small, self-contained images like emojis) means that those works are far more agnostic in their meaning; they do not carry the cultural baggage that emojis do.

The fact that ASCII art can be made on any text editor program makes it ultra-accessible (and cheap) to make. So, if you feel like bringing back the 60s or your parents’ ‘fun’ Outlook signature, there are plenty of tutorials online. Or, you can make like a Gen Zer and communicate only in emojis. 👋