Ashley Zelinskie: What is Art for the Singularity?

“What is art?” is a question that has been haunting the minds of philosophers, artists, gallery-goers, art critics, your mum and pretty much humanity-at-large since the dawn of representation itself. Yet, whilst most of us still grapple with the semantic definitions of  ‘what’, ‘is’ and ‘art’ one artist out there is taking it one step further still.

Ashley Zelinskie, work in progress (2021) © Courtesy of the artist.

She’s not as much concerned with the ‘what’s’ as she is with the who’s. But wait, because by ‘who’ she doesn’t mean me or you or that random guy staring puzzingly at the screen asking ‘WTF are NFTs!’ nope – she’s talking about the Other par excellence, that Thing of horror movies or existential breakdowns. The Other that is as alien to us as the NFTs are to some – hold on, I promise you I’ll explain what NFTs are in just a moment! – but first, I want to introduce you to Ashely Zelinskie, the thinker and artist extraordinaire behind this ‘othering’ aesthetic pursuit.

Ashley Zelinskie thinks and produces art with infinity, impermanency and immateriality in mind. She’s not concerned with the here or now – rather – she’s troubled by the there and then. The ‘there’ being a future in which me, you and her are long gone and a ‘then’ where all the here’s, now’s, who’s and what’s are condensed into one singularity: a sublime liquefaction of all our fears, amazements, anxieties, creativity, ideas – in other words, all that makes us ‘human’.

Zelinskie probes into a future where it’s not just humans who command and dictate knowledge but also non-human entities like machines. To achieve this, Zelinskie swaps the paintbrushes for the fine code of programming languages thus entering a world far less characterised by the temporary and forever-in-flux ‘I’ and a lot more signified by the cool, immutable forever-universality of the binary code ‘1’. If the post-structuralists had rejected the rigidity of Sasseure’s language in favour of the freedoms exerted by the signifiers, Zelinskie asks for a return to the binary, but this time, to accommodate the non-human into the equation!

The language of code may not seem very artistic at first. To be fair, the sharp edges of the binary code may even appear harsh against the backdrop of poetic licence. After all, how could the glacial austerity of coded language transpose the insincerity of metaphors, the ambiguity of metonymy, the messy playfulness of similitude? If you’re envisioning the tyranny of zeros and ones coding what amounts to the sentence “off with their heads” as their code guillotines serifs, accents and apostrophes with virulent conviction then you’re not alone! This may not be the language of poetry, but it surely is the language of universality – that which everything can be condensed into. Just like the ancient alchemists used to condense magical potions into alchemical flasks, Zelinskie is condensing human thought and creativity into a universal binary via the creation of art.

But if some are worried that the flattening of language into the banality of binary will mean the dissolution of poetry, perhaps here’s where the challenge begins. What is art? Is art and artistic practice defined by its ability to mean different things to different people or entities? Can the subjectivity of art transpire through to the machine via the coded language of noughts and ones? Zelinskie has taken on the job of not just making the binary creative but also extending the artistico-democratic pledge to cover non-humans!

In Zelinskie’s works of art like Golden Ratio (2013) and Sacred Geometry (2016), she digs deeper into the underlying concepts that dictate and shape what we call art or, even more plainly, an object of aesthetic value. Following Plato’s train of thought, Zelinski asks us to see the objects she creates beyond their material or physical qualities. To Plato, the objects we see are but representations or templates of the pure ideas that are behind them. To take the primal question: what is art? Whatever it is, be it the beauty of its paint strokes, the allure of the flower it is copying or the language used to describe it, what is ‘beautiful’ neither lies in the paint strokes nor in the original flower or the poem written about its blossoms – rather, ‘beauty’ lies is in the universal concept of pure beauty which is unattainable to us. Beauty then, is an idea of a Form that exists independently of us and of which beautiful things like perfect golden-ratio seashells and stylistically beautiful poems are but the consequence, not the cause.  If this Form that guides all principles exists prior to us and our inventions, then one could argue that this ‘language’ is universal. Does the golden ratio look as beautiful to us as it would to an alien or to a machine? These are just some of the questions Zelinskie attempts to answer by creating art for the non-humans.

To make her point, Zelinskie takes inspiration from conceptual artists who have pushed the boundary between representation and idea. In One and One Chair (2014), Zelinskie rethinks one of Joseph Kosuth’s iconic artworks: One and Three Chairs (1965). Playing upon the linguistic and artistic structures of representation, Kosuth’s original piece sought to break down the barriers between language, picture and signification. It did so by showing an installation of a readymade chair, a copy of this chair in photographic form blown up to the exact size of the readymade and then a dictionary definition of said chair printed next to the two chairs. Each, according to Kosuth, were chairs. But which one is the real deal? Is the real chair ‘real’ in light of its material physicality? Or is the picture more real because the ‘real’ chair may suddenly break and lose its utility performing as a chair no more? Or, is the description the most ‘real’ for it is the most faithful in conveying the idea of a chair to people without even having to show them a real chair?

A Werner Herzog documentary called Land of Silence and Darkness (1971) comes to mind. In it, Herzog confronts the challenges faced by deaf-blind people as they grapple against a world that isn’t made for them. Most things are made with our sense of sight and hearing in mind, and art falls into one of those categories that predominantly exercises those senses. What does a chair look like to a person who has never seen a chair or heard the screeching sound it makes as its weight pushes against the floor? And when we say the chair is made of wood will they imagine it brown? In the documentary, doctors highlight how difficult it is to explain abstract concepts like colours to the deaf-blind from birth. Nowadays, the use of programming code allows us to implant extensions that can pick up colour wavelengths and transform them into information. This advance in technology has allowed people with achromatic blindness (total colour blindness) like Neil Harbisson to perceive colour for the first time. Harbisson, an artist who is now considered one of the first cyborgs, had an antenna permanently implanted in his skull which helps convert colour wavelengths into audible vibrations. But the question Zelinskie would ask to Harbisson is, does your antenna see the real chair as the ‘real’ one or the photographic copy instead?

Ashley Zelinskie, One and One Chair NFT (2021) © Courtesy of the artist.

Curiously, Zelinskie’s reinterpretation of this chair dilemma playfully subverts the choice Kosuth originally gives us. It is no longer, One and Three Chairs, it is now One and One Chair – there is no longer the ambiguity of the I in the equation, only the sure binary of 1’s and 0’s. In fact, Zelinskie’s chair is an exact 3D rendering of the chair Kosuth used which is then broken down into a hexadecimal code and then rebuilt using only binary code. Whereas for Kosuth the preoccupations lied within the question of ‘which one’s more real’ with Zelinskie, her artwork looks to answer the question ‘which one can be seen by the most universally’.  It’s no longer about which one is real or fake to me and you, but more about which one the machine (or the cyborg) will interpret as real. We’re thus expanding our ontology to cover the preoccupations of the non-human as well as the hybrid cyborg.

Via the language of binary code, Zelinskie aims to create a comprehensive system of aesthetics characterised by the universality of the Platonic ideas of Form. A language that isn’t just for me and you but for the singularity of the machines of the future and all those who don’t see the world via the traditional senses. Through the language of code, Zelinskie creates art for the ‘other’, call it the non-human, the machine, the alien – or whatever entity your creativity conjures! Zelinskie’s art exists on the cusp of digital representation: it is material, for it aims to immortalise the abstract through the object, yet it is immaterial for it focuses on condensing the material into the binary of a universal language.

Zelinskie asks us to place more value on the Form than on the physical object. This value placed on the immaterial qualities of art makes her jump into NFTs a logical one. So, for all of you wondering what on earth NFTs are, let me explain! As many blogs will explain, NFTs stand for non-fungible tokens and act as certificates for non-physical objects like digital assets thus making them unique. They do so by storing data on a digital ledger called a blockchain which makes them non-interchangeable, meaning that their value cannot be exchanged for something else but can be sold as valuable works of art just like real paintings do.

In the context of Zelinskie’s project, we could see NFTs as shifting the value away from the materiality of things by conferring value to abstract conceptual ideas instead. Whilst most of the conversations surrounding NTFs are sensationalistic in nature, perhaps the wider question about NFTs that is currently unanswered lies not in the concepts of ‘originality’ or ‘value’ but rather in the question of intangibility and immateriality. Just like Zelinskie is looking at that, which lies beyond human understanding, perhaps NFTs should be looked at in the same vein, after all, humans already imbue intangible things with value that’s beyond rational, so if you think about it, NFTs really aren’t so weird! 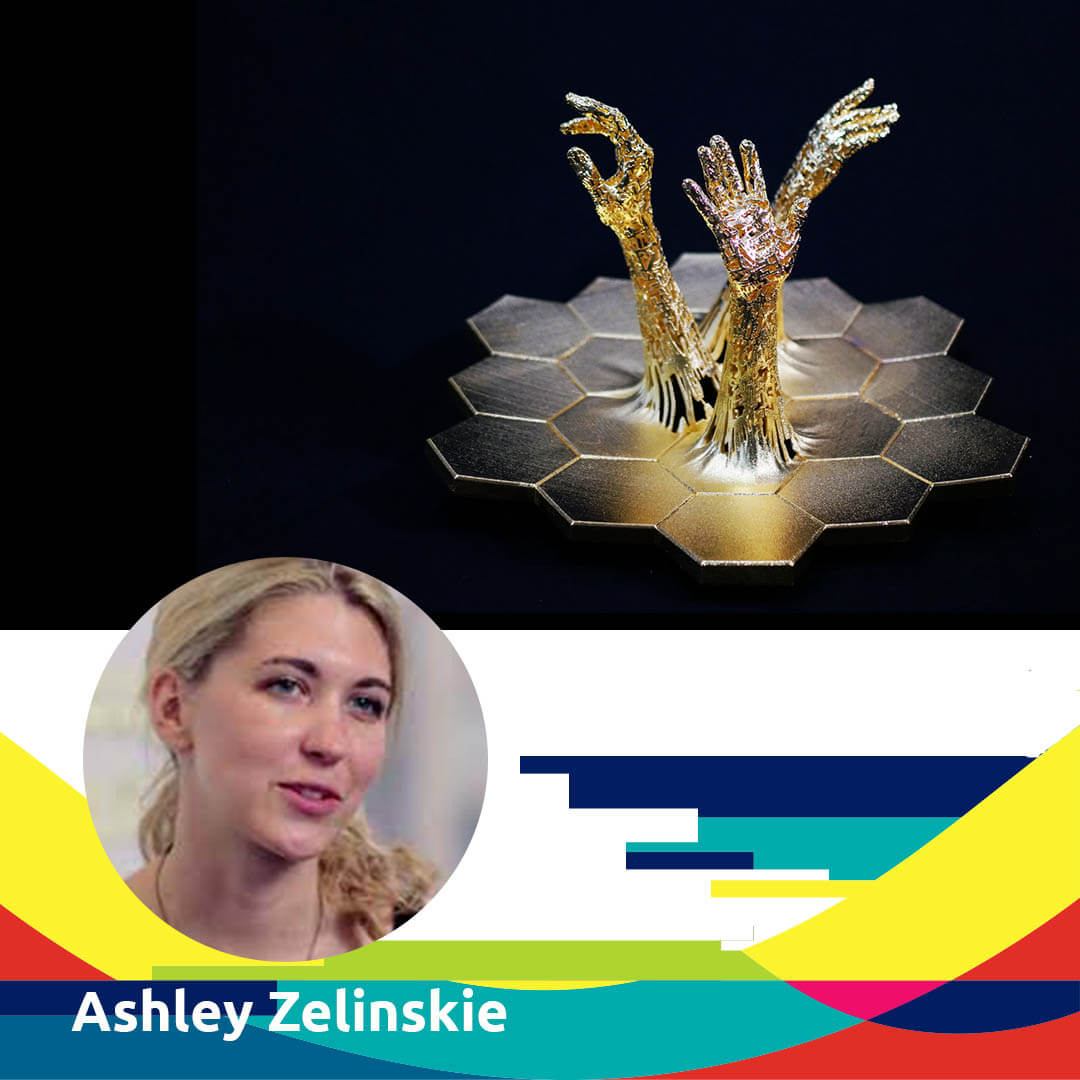