Buying the sky: Digital art at C/O Berlin exposes the reality of the cloud

The web of ideas and associations mapped in C/O Berlin’s Songs of the Sky: Photography and the Cloud reveals the complexities of two intangible types of cloud. Displaying a range of media, the exhibition asks us to get our heads out of the clouds and recognise the realities of our new technology-driven world.

Standing sandwiched between a few square metres of artificial grass and a peaceful blue sky at C/O Berlin, you may notice that something seems slightly off. Bursting through the sound of twittering birds is a frantic auctioneer’s encouragement to bidders, and the ephemeral clouds projected above are bluntly outlined and framed, ready for purchase. Have some spare change? Why not buy a cloud? 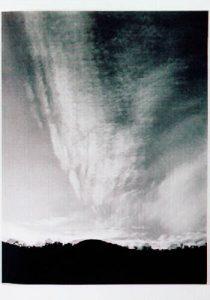 Artists have always been drawn to the sky: John Constable wrote in 1812 that ‘The sky … governs everything’, and Alfred Stieglitz used photographs of clouds to explore the difference between a photograph’s subject and its content in his Songs of the Sky series. It is from this series — later titled Equivalents — that C/O Berlin has taken its exhibition’s name. Curator Dr Kathrin Schönegg has used the motif of the cloud to trace the network of metaphoric and philosophical connections between the environment, the digital cloud, artificial intelligence and geopolitics.

Louis Henderson, All That is Solid (2014), computer desktop screen recording, 15 min 43 sec. Courtesy of the artist and LUX, London.

C/O Berlin’s exhibition wears away at the poeticism of Stieglitz’s original phrase, ‘Songs of the Sky’. The fact that when we say ‘cloud’ now, we are more likely to be speaking about ‘the’ cloud, rather than ‘a’ cloud is indicative of humankind’s changing concerns. We are turning away from the natural world with all of its soulful connotations towards a digital realm where the physical consequences of our activities are more easily hidden.

Louis Henderson’s All That is Solid (2014) exposes the neocolonial Columbian exchange that is implicit in our consumption of technology. The film overlays footage of the harsh conditions faced by electronic waste recycling workers in Accra, with Elysian corporate presentations about cloud infrastructure. The iCloud icon floats blissfully above scenes of a young Ghanaian man walking in fields of e-waste, black plumes reaching towards the sky behind him. The windows shown on Henderson’s desktop are themselves like clouds, drifting and disappearing on the sky of his screen. The neat user interface (the use of which is now so dependent on the cloud) belies the excess and dirt that facilitate the construction of these sleek aluminium totems of modern life. 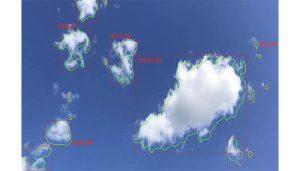 Noa Jansma’s Buycloud (2020-21) (described at the start of this article) also explores themes of consumption and exploitable resources: Buycloud allows speculators to purchase clouds, transforming these masses of vapour into commodities. The physical video installation is accompanied by a virtual speculation market and a website. Jansma uses AI to place a virtual ‘border’ around each cloud, thereby ‘claiming’ them as her own. By scanning a QR code in the physical installation, spectators can enter the market on their phones and purchase these clouds. A certificate of ownership is then generated and registered in the virtual cadastre. In this way, Jansma pulls natural phenomena into the virtual cloud: the cloud is consuming clouds, creating a new iteration of our existing market infrastructure, colonising and claiming the sky. 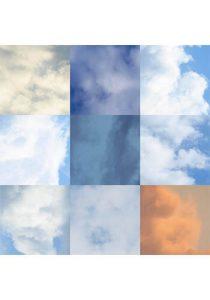 Other works in the exhibition are less blatant in their exploration of technology. The Shinsuengback Kimyonghung collective’s Cloud Face (2012) shows a series of photos of clouds, which, if you have an active imagination, look like faces. However, these ‘faces’ have not been recognised and selected by humans but rather by face detection AI. Unlike humans who may anthropomorphise and imagine that a cloud looks like a face, for AI the cloud either is or is not a face. For a human, we call this misidentification ‘imagination’, but for AI, we call it an ‘error’. Our differing definitions and tolerances for misattribution for humans and technology may reveal not only a more forgiving attitude towards ourselves, but also a higher faith that when AI makes a determination it is correct (whether that is the case or not). 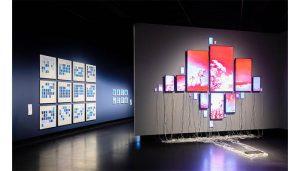 Evan Roth’s Landscapes takes perhaps the least explicit approach to exploring clouds in the exhibition. The series, which was commissioned for C/O Berlin, commenced in 2014 and comprises over eighty slow-motion infrared videos. The footage documents the global physical infrastructure necessary for the virtual cloud to function, and shows various points where fibre optic cables leave the oceans. Many of these cables use undersea links laid by the British Empire during the colonial period, linking the imperial power of cloud providers today with colonial models of empire. Although cloud computing seems relatively novel, the power structure it represents has deep roots (or cables), which should not be ignored.

Contextualised in the exhibition by historical works from the nineteenth and twentieth centuries, these digital works represent the continuation of a long tradition of artists playing with clouds. As a subject, they are dramatic, emotive, and dreamy; their content is intellectually rich and provoking. In an exhibition about the heavenly blue celestial realm above our planet, the insidiousness of technology and the changing attitudes we hold towards the natural world bring us back down to Earth.