With rippling patterns and colours torn from the screens of MTV, Ilithya’s works are a paradise for 90s babies. Agora sat down with Ilithya via Zoom to talk about her many artistic personalities, probe her curiosity in NFTs, and explore how she creates balance in her practice.

How was her morning going? ‘Short, so far’, Ilithya laughs. She’d spent the previous night at a Warpaint concert in Hamburg with a friend, so she’d slept in. ‘It’s four women, and all four of them sing … It’s one of those bands that’s very equal,’ she says. ‘In a lot of bands, it’s the singer who takes the stage.’ It’s no surprise that Ilithya takes joy in Warpaint, and is happy to celebrate and promote them; her outlook on life is characterised by the way she voraciously collects experiences to enrich her work.

Born in México, Ilithya ‘came to Germany because of love, so it’s a bit cheesy!’ Ilithya was working at a local internet service provider in California when the Global Financial Crisis hit in 2008; her boyfriend found a job in Germany, and Ilithya moved with him, with the idea that they would perhaps work there for two years. Two years rolled into 12, and Ilithya and her partner continue to live and work in Hamburg.

Ilithya’s diverse interests are informed by a creative childhood. ‘Since I was little, I was surrounded by art, films, music.’ Her mother painted cubist works, and ‘she taught us about Picasso, and said she liked it because it was not so linear. She did [a painting] of a woman having breakfast, and I remember me and my brother used to just stare at it, and I had a hard time seeing it. Now I see it right away, but as a child it was hard’. Ilithya has ‘never played in a band, but I was always in the scene since I was a teenager’. Visual art allows her to combine all these passions: ‘When I work with visual art, I can get inspired by some film and maybe some photos, and make an abstract thing out of it’.

Creative coding was the key to allowing Ilithya to fully realise her creative openness of mind and spirit, to find a niche that fulfils the many aspects of her practice. Introduced to creative coding by a fellow designer in Hamburg, Ilithya says ‘we couldn’t conceive of people doing this with algorithms … I started to dig deep as well myself, and found something that really took my interest. [With creative coding] I can do design but also art, because it doesn’t have to be so linear.’

Ilithya’s interest in generative art stems from its ‘spontaneity, since you cannot guess the exact result, despite having an idea, after the direction or guidance one gives to the machine. It’s kind of like waiting for a surprise to show up, after you placed the ingredients.’ She is ‘very curious to keep experimenting with these new technologies, because they are not just being used in the arts but in our everyday lives … We’ve seen all these films about the machines taking over, and I don’t think that would happen because I feel like of course with the years they get better and better, but because of us the way that we train them, but in the end, we will always need to cooperate with them, to guide them, because they don’t have this empathy.’ In her music video for Tinca Tinca’s Magnetic North, Ilithya used around 80 photos from a shoot the band had done, and fed them to the machine. ‘I was just very curious to see what the machine was going to draw’, she explains.  The outcome was a gently morphing blur of green and white (recalling the trees and white suits in the original photos) matching the cadence of the song. With just enough figuration at times for the eye to catch a glance of what the source material showed, the piece teases the mind.

Ilithya has managed to capture the unique vibe of a double-zeitgeist: in her works, the peak-90s aesthetic (MTV, Daria’s grungy palette, and acid wash) is visceral and thriving.  However, 90s style is also the style of now: Olivia Rodrigo wears Blumarine, and jeans are dangerously low rise. Your sense of whether the visual language of popular culture and fashion now is one of the present or the past may depend on whether you’re a Millennial or Gen Z, but Ilithya says ‘I think for every person there is a time in their life that really marked them and for me it was the 90s … It was a decade when there was so much happening, but I was so small, so I didn’t really get the grasp of it until later.’

Although it’s easy to be mesmerised by the optically illusory visions on Ilithya’s Instagram (they recall magic motion cards, but are all the more magical for the fact they perform their magic autonomously), not only her work products, but her way of working is deliberate and thoughtful.

Ilithya’s #anydayshaders is a personal challenge started in April 2020 when she started learning about shaders. Having followed the 100 Days of Code in the past, Ilithya remembers she ‘used to be very stressed about it, because I would try it and follow other people, and they would just post constantly, and I would be very overwhelmed because I couldn’t do something daily at that time.’ Instead of adopting an ‘everyday’ hashtag, she decided ‘I’m going to call mine #anydayshaders, because I don’t want to put pressure on myself to do it daily, because at the time I couldn’t. And also, I didn’t want to put a number, like the 100 Days of Code hashtag, because I thought it could be that after a month, I’m going to be sick of it … I wanted to take the weight off this personal challenge.’

The challenge has allowed Ilithya to gather ‘a little library for myself: chunks of things that I do, and now I can pick stuff that I’ve done in the past and put it together like a puzzle, so I don’t have to start from scratch.’ Ilithya’s use of the term ‘any day’ rather than ‘every day’ is typical of her ethos of consideration, moderation, and not looking at life in absolutes. 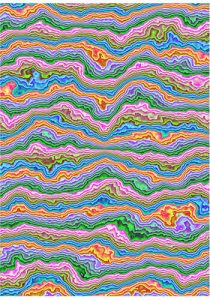 Most recently, she released her Trippy Posters collection on Foundation. The pieces are inspired by optical illusion posters Ilithya saw in malls in Mexico in the 90s. ‘One of the things I like as a viewer is interpretation; it could be something completely unrelated to what the artist came to, or it could be that you nail it … for me [the series] took me back to those optical illusion art posters from the 90s, so I was thinking, let’s see what people think of when they see them.’ The fact that these digital ‘posters’ are rooted in physical source material reflects the fact that, Ilithya explains, ‘despite loving technology, I’m still very old school when it comes to physical stuff – I like to buy art that I can hang up on my wall.’

Ilithya is currently working on a few NFT-related projects, which she has taken on as ‘the technology behind this is super interesting and different to experiment with.’ But don’t take Ilithya’s interest as a full-scale commitment to NFTs – her curiosity and wish to be unconstrained is too great: ‘I didn’t want to end up in that niche … to me it feels like if I were to do a lot of NFTs, that maybe I would be perceived as just doing it to make money … I don’t know if it will change the way that I’m doing my art, because [then] I’m doing it for money. 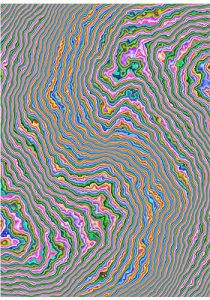 In a much more tangible form, Ilithya’s work was most recently shown at Night Lights Denver, with Personalities – a pastiche of four different works – projected in the Denver Theatre District. Her second large-scale projection work, Personalities is a combination of four pieces in different styles. ‘I thought, this is literally reflecting who I am, or at least how I feel that I am as an artist. I have all these different personalities … like sometimes you’re in the mood that “Oh, today I want to listen to classical music, to Beethoven or Mozart,” and then maybe another day you’re like, “I want to listen to rock music, or just get dressed in sweatpants.” So, it’s that kind of mood, feeling, call it personality.’ Presenting viewers with these moods on a large scale, absorbing the viewer into the experience, gives them the opportunity to reflect on the many personalities or moods they have.

Despite her love of the 90s, Ilithya is an artist who values the progression of life and collecting experiences, and these current projects allow her to continue to develop her practice. ‘I remember learning snowboarding when I was like 25, and a lot of other things I’ve learned later than others … but maybe this is my moment, because I have all this other experience I can put into things, than if I’d gotten here ten years earlier, I wouldn’t be able to mix it with this other stuff.’

Ilithya is a digital artist, creative developer and designer from México, currently living in Hamburg, Germany. Her work explores various applications of machine learning and new media art technologies, including 3DCG, generative art, large-scale light projection installations and audio-reactive visuals. In 2020 she took part in the CODAME collective, and she is a member of the Recurse Center community of programmers. Ilithya’s Trippy Posters collection is available on Foundation.

With rippling patterns and colours torn from the screens of MTV, Ilithya’s works are a paradise for 90s babies. Agora sat down with Ilithya via Zoom to talk about her many artistic personalities, probe [...]