Discover how NFTs are democratising the art world and making it more inclusive to women in Digital Art.

A post shared by Women of Crypto Art (@hellowoca)

The NFT, or Non-Fungible-Token, has become an art market buzzword in recent years. Being non-interchangeable, and irreplicable, the tokens are generating a new market for unique and authenticated works of Digital Art. However, this buzzword has emerged in tandem with a predominantly male-centric narrative privileging male artists such as Beeple and Andrés Reisinger. Graffiti Queens, a new online international exhibition, presents a challenge to this narrative as the first all-female NFT artist group show in Digital Art history.

Within the wider public sphere, digital spaces are playing an increasing role in social movements such as #MeToo and Black Lives Matter. However, this has led to rising accusations of tokenistic support for women and minority groups. The practice of tokenism can be defined as a forced level of inclusivity supported for superficial ends. It is dangerous because it can create the appearance of inclusivity without making any meaningful change. Given the growing presence of tokenism in these areas, notably social media, it seems only right to question the role of NFTs within this. Are NFTs another case of tokenism or can they be used to generate vital change in the digital sphere?

Taking place on the Decentraland platform, Graffiti Queens included over 200 digital artists when it launched on April 3rd. Hosted by Graffiti Kings, the exhibition was organised by its founder and artist Darren Cullen, alongside curator Crypto Yuna. The idea for the show was born out of a discussion by members of WOCA (Women of Crypto Art) about creating a group exhibition for women digital artists in the NFT space.

A post shared by Women of Crypto Art (@hellowoca)

Graffiti Queens is an empowering exhibition that acts as an open call for diversification within the Digital Art sphere. Its deliberately inclusive approach was bolstered by its no fee, no application and non-platform specific policies. Subsequently, women of all ages, as young as 8 years old, took part; a true marker of inclusivity. Doubled-sided walls featured six galleries of over 280 artworks. Viewers were presented with an eclectic mix of approaches to crypto art. Some artworks were entirely digital, while others had been produced in pencil and paint before being digitally manipulated. The exhibition’s immersive nature was further emphasised by pounding music live-streamed from the Graffiti King’s radio station It seemed only right to name the show after an art form that is equally void of rules and regulations. It is no surprise then that the exhibition received significant attention, including from Paris Hilton, who recently entered the NFT game.

The exhibition included award-winning animator and digital artist Marjan Moghaddam, who was also on the Graffiti Queens organising committee. Her visual language is as unique as the NFT tokens she uses to generate it, often favouring voluptuous female figures morphing through digital spaces. She has exhibited at the New York Armory Show, Art Basel Miami and Siggraph Computer Animation Festival. She was also selected for the Forbes Top AR Projects of 2019 list. Having fled Iran during the Iranian Revolution, she credits her discovery of technology in 1997 as a form of therapy. Her practice often centres around political, cultural and philosophical discussions. Although she left revolution behind, she created her own form of revolution in New York, where she sought to transform technology and its creative capacities.

Moghaddam’s artistic practice has varied over the years, but she has recently gravitated towards fantastical multimedia digital sculptures. Her digital embodiment in the exhibition Crypto Art Rides The Bull is no exception. The piece depicts a glitching multi-coloured female figure riding Arturo di Modica’s Charging Bull outside the New York Stock Exchange. It is particularly poignant to include a symbol of masculine power and aggression in an all-female exhibition. As a result of its patriarchal connotations, Charging Bull has also become a site for activism, which is key to the exhibition’s ethos and Moghaddam’s own practice. Some of Moghaddam’s most notable works include her ArtHacks series, where she hacked art fairs by digitally imposing female embodiments into the spaces. Therefore, Graffiti Queens reflects Moghaddam’s earlier work and the capacities for digital shows to democratise space. Crypto Art Rides The Bull questions whether Digital Art represents a new beginning. Given the authenticated nature of NFTs, their sale binds them exclusively to their author. This potentially represents a shift in the treatment of women artists. Women can no longer be overshadowed or miscredited by their male counterparts, something that women have faced in the artworld and other spheres for a long time.

Agora had the pleasure of interviewing Moghaddam about the significance of the exhibition and her role in it. She told Agora about the gendered nature of the art world and digital sphere, stating that one of the exhibition’s key motivators was to generate what she calls “possibility”. Moghaddam reflects on the challenges of being accepted as a woman working in Digital Art. Speaking about how gender affects value and intellectual merit, she opens up about how people perceive men as innovators while treating women with suspicion. She says that people often assume her work is by a man, as if a woman could not possibly create this kind of work. She tells Agora, “I always joke that when I die I want a tombstone to say, ‘Here Lies The Guy Who Did Her Work For Her’ because everybody always assumes that there is a guy doing my work”.

So what have NFTs changed? Are NFTs a democratising medium? According to Moghaddam, Digital Art provides a fairer way for women to sell their art. By selling directly to buyers online, NFTs prevent artists from being disadvantaged by the patriarchal gallery system. She tells Agora, “The contemporary art world has excluded women or it has forced women into artistic practices that may not necessarily be meaningful to them but are required by the market. What women in this space are so excited about is that we can reinvent the rules”.

The exhibition featured longstanding feminist activists, but also NFT newcomers Pussy Riot, among others. Their four debut NFT drops are taken from their recent music video Panic Attack, which took over 106 cameras to film. A particular highlight was Slaughtered Clones, depicting the group’s founder Nadezhda Tolokonnikova running through a toxic factory full of female bodies being cloned for consumption. The work represents the impact of objectification on women’s mental health. Fitting in with the defiant and inclusive theme of the exhibition, some of the proceeds of the sold NFTs were donated to a women’s shelter for domestic violence in Russia.

So, does Graffiti Queens represent another attempt at tokenistic support? Absolutely not, in fact, it has achieved the opposite. The exhibition enabled tokens and diversity to meet head on. It has highlighted how Digital Art and its tokens have the power to generate positive change both within the art world and beyond. Inclusion is a continuous process of integration that lasts long after superficial acts of tokenism have fizzled into the background of social media. Graffiti Queens represents a decisive step in the right direction. Not only does the exhibition acknowledge the current state of the Digital Art sphere, but it also takes active steps to solve it. The exhibition may have been born of tokens, but it is far from tokenistic. 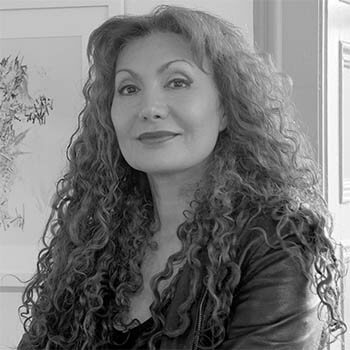 Marjan Moghaddam is a renowned, award-winning, and pioneering Digital Artist/Animator, known for her unique style of figuration/animation in 3dCG and critical discourse. She is the recipient of top awards/grants from the likes of Rockefeller Fund, selected for top festivals such as Siggraph (4 times), and has exhibited her AR art at Smithsonian.