@fnekf Stills from “Sonomotion – experiment II” © Courtesy of the artist.

Without a sound, the three videos that make up Sonomotion form a visually stimulating work of art: viewers can watch the matter and still walk away with a profound appreciation. Experienced as intended with Akbari’s compositions, the work invites the audience to become part of the digital matter as it reacts to the stimulus of the music. It is an assured step forward in Akbari’s career as a digital artist, confidently blending his talent in experimental music composition and his stunning visual work.

How did you get started with audio-visual art?

I played guitar in a metal band as a teenager, and then I started experimenting with electronic music and composing. In my very early 20s, while studying IT and working as a web designer and motion-grapher in advertising agencies, I became interested in digital art and using code and algorithms in creative processes. I was fascinated by the capabilities of reactive visuals that respond to real-time rendering and decision-making. I started creating visual sketches and videos for my music, then I shifted my focus to creating AV performances, interactive, multi-sensory installations and web-based experiments as well as collaborating with other artists and releasing albums. My creative process and methods were always changing.

Who or what inspires you most when you are creating your pieces and performances?

For me, there are two different kinds of inspirations: one inspires the method of creation and the other contextualises it. Sometimes they are totally separate and different and other times they’re the same thing.

As an artist, I’m interested in creating an autonomous process or a real-time symbiotic system, observing and capturing its different states. Then I can deconstruct, contextualise, or decontextualise it in search of aesthetics, a new meaning, or a specific context I have in mind. It can be a reflection of what I am at the time, an experience, a feeling, an experiment, a book I’m reading or a movie I’ve watched.

Sometimes I have an idea that I try to translate into a piece of work or a system, and other times it’s the other way around. I like to create evolving non-deterministic art systems while keeping my agency as the artist to alter them. I think my main sources of inspiration is observing shifts in the processes from natural to artificial, from actual to virtual, and from social to biological.

What draws you to experimental music like the album you released on the Taalem label?

Perpetual is about a rare experience in my life. I was stuck in an emotional paradox that I thought I never would get out of. I thought to myself what I was feeling was an aftermath of experiencing something I wasn’t capable of, and ironically, I felt very joyful to be lucky enough to experience something like that. I tried to compose a long piece, expressing that feeling. The piece starts in a state of suspension, slowly evolves and morphs into a perpetual void. I think of the first part as a liminal state and the second part as the destination that leads to an infinite numbness. The photograph of a decaying object, taken by Delphine Ancelle-B., is the perfect album artwork for it.

What do you think defines “experimental” art and music?

Being an experimental artist is about always looking for new aesthetics and radical change, searching for new ways of creating, performing and contextualising art. It’s about always doubting the results. As an experimental artist, even when you create something you are satisfied with, you will question it, break it, and create something opposed to it. And just like experimentation in any other field, there are failures and successes. Some art experiments will result in changes – giving rise to a new way of creating, a perspective or a style – and some of them just won’t.

Arash Akbari “My Hands Are Shaking” 2012 © Courtesy of the artist.

Looking at your Sonomotion works, what initially inspired this particular marriage of visual and audio artistry?

Every sound in nature has a source in space, and it is the result of an action, force, or movement. So we can conclude that every sonic event has a visual stimulus, and both are coming from the same source in the space at the same time. Our brain recognises and connects these two and perceive them as one single event.

The digital world is lacking this contextual connection. Most of the time, we think of these audio-visual events as two separate objects. I’m trying to find ways of making this connection.

What if we can create a set of parameters and generate visual and sonic events based on those parameters all at the same time. What if the motions and movements, the digital matter’s properties, and other elements in the visual stream can affect the sound and music and vice versa?

Sonomotion aims at exploring these phenomena by applying force and motion to digital objects and materials with imaginary properties, then mapping and metaphorically translating their reactions into digital waveforms and vice versa. It aims at creating an entwined and autonomous audio-visual ecosystem and aesthetics in this metaphysical system.

M.S.L is a digital data sculpture inspired by the global average absolute sea-level change data collections provided by the US Environmental Protection Agency. 2020© Courtesy of the artist.

What tools did you use to create audio tracks and visual effects?

How do you feel the Sonomotion pieces stand apart from your other works, such as the M.S.L display in New York’s Times Square?

M.S.L is a digital artwork in which I experiment with turning data into artistic expression and using parameters from the earth to make a data visualisation experience. Sonomotion is a digital artwork that tries to create an imaginary digital object or creature that has material properties and interacts with the supposed forces in the digital environment.

I guess there are some aesthetic and contextual differences between the two. The bolder one is that M.S.L is the digital representation of a temporal and physical phenomenon but Sonomotion tries to make a digital creature and environment perceivable and represent it as a natural phenomenon.

Arash Akbari “Flashbulb” is an interactive Audio Visual installation based on the idea of “cellular memory 2014. © Courtesy of the artist.

Of your contemporaries, who do you most admire? Whose works would you recommend to anyone interested in the kind of art you create?

There are many great artists working in the field, but if I have to name a few:

The musicians I admire, to name a few, are:

If there were a study course dedicated to your work, and the world of art that you inhabit, what five books would you put on the reading list? 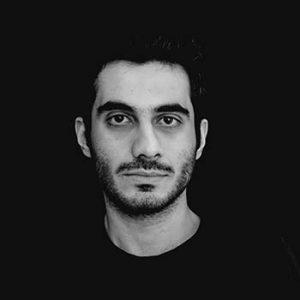 Arash Akbari (born 1987) is a music producer and new-media artist, based in Tehran, Iran. His interest in dynamic art systems, human perception, nonlinear narrative and the co-existence between physical and digital worlds compelled him to explore the fields of generative systems, interaction design, and real-time processing.
Akbari directs his experimental practices into audio-visual performances and installations, interactive applications and multisensory experiences. His music compositions include field recordings, musical instruments, digital synthesis, DSP and noise.
He’s interested in finding aesthetics in autonomous multisensory generative systems and studying their reactions to the human agency as well as the human interaction with and perception of them. He explores how natural nonlinear and emergent behaviours and phenomena can evoke emotions and meaning in humans and how to create art systems based on this process.
His works have been exhibited in different festivals and exhibitions around the world, such as Athens Digital Arts Festival, 3D Web Fest, SetFest Tehran, Cinnamon Colomboscope and Graphical Web Conference. He has released albums on Flaming Pines, Unknown Tone Records, Taalem and Soft Recordings among numerous other labels.