Digital art is most often associated with what is to come – it looks forward, seems intrinsically futuristic, and has only become mainstream in recent decades with the advent of technology that makes it accessible to the broader public. However, digital art is not constrained to the knife’s edge of contemporaneity. Video art, in particular, requires an engagement with time across its eternal spectrum, collapsing the experience of past, present, and future into the viewer’s momentary engagement. Nicole Welch, an Australian artist based in the regional city of Bathurst, plays with time in her time-lapse video works, placing herself and the viewer in the Australian landscape which seem at once immediate and everlasting.

Welch’s digital artwork Yarrahapinni (2019) was most recently exhibited at Sydney Contemporary Presents, the 2020 online edition of the annual Sydney Contemporary Art Fair. The single-channel time-lapse video captures the flow of water into an estuary. The Australian landscape provides a plentiful palette from which Welch can scrape shades of time. Rolling clouds and the breath of wind through trees and across the water contrast with the solidity of rocks at the shoreline. The infrared tint belies the movement of the sun across the day – the light stands still, but time passes by. The fact that the Yarrahapinni wetland is currently the subject of a restoration project undertaken by NSW National Parks and Water Research Laboratory reminds us of the havoc humans can wreak on nature over time, and the reverberations our actions have over the ages. 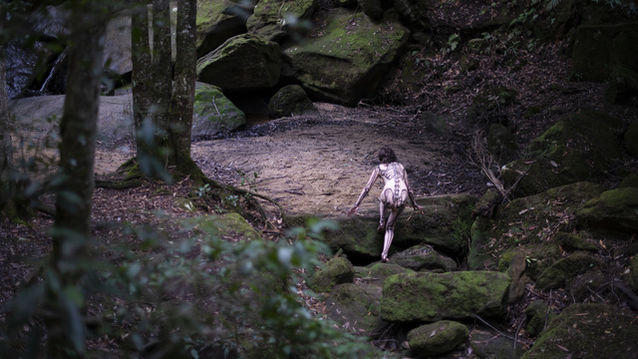 Nicole Welch Transformation 2018 © Courtesy of the artist – from Artsy.

Welch’s work is richly soaked in the philosophy of time explored in both Western and Indigenous Australian traditions. Girt by an antique gilded frame, Yarrahapinni engages with the long tradition of landscape painting, evoking the spirit of old masters – the viewer is encouraged to recall how time has historically been depicted in the Western tradition. Poussin’s Landscape with a Man killed by a Snake (c. 1648) (which is displayed at the National Gallery, London, in a frame similar to that which holds Yarrahapinni), draws the viewer’s eye through the narrative depicted using diagonal lines and recession into the landscape. By contrast, Welch places the viewer in the landscape, allowing it to dance before our eyes in an eternal replay of the 3:21 minute loop.

However, Welch is not merely expanding on the Western tradition of depictions of time. For Indigenous Australians, the past is understood as a component of a circular order known as the ‘everywhen’. The ‘Dreaming’ — an English attempt at capturing an Indigenous and Torres Strait Islander concept, known as Jukurrpa in the Warlpiri language of Central Australia — is an oral history of the world and creation, and is interwoven with concepts of landscape and history. The Dreaming did not take place at the beginning of time (in contrast to Western creation narratives), but rather encompasses the past, present and future. The ‘everywhen’ describes this philosophy of time. By taking a moment in time and depicting it in a loop of time-lapse movement, Welch provides a hypnotic visual representation of this concept, tying it to the landscape of the wetland, and opening a conceptual door to understanding what it means to be in the ‘everywhen’.

Welch’s work emphasises that although digital and new media art have been facilitated by new technologies, its comparatively recent emergence does not confine its relevance or explorative power to the present and future. Welch’s time-lapse videos exemplify the potential for digital art to provide opportunities for viewers to take a moment to experience the ‘everywhen’ and ponder our place in eternity. Will you let the immersive power of Yarrahapinni draw you into ‘forever’, if only for three minutes?

Nicole Welch (b. 1974, Bathurst, Australia) (@nicole_welch_artist) is based in the regional Australian town of Bathurst. A new media artist focussing on the moving image and the adaption of cinematic devices to explore the Australian Landscape and time, she holds a Masters of Fine Arts from the University of New South Wales. Welch has also studied at the Australian National University in Canberra (Bachelor of Visual Arts (Printmaking), Honours) and has also lived and practised in the United Kingdom. She explores the concept of immersion, using her body as a performative vessel for many of her video works. Welch is represented by MAY SPACE (@mayspacesyd), a Sydney-based commercial art gallery. In 2021, MAY SPACE is leaving its current physical premises to transition to a purely online presence – MAY SPACE Online – in an exciting step towards a digital future.

As a member of our community, you will be among the first to know who is coming to our Talks. Stay tuned to discover more digital artists and exclusive interviews.