The woman’s figure served as the muse of the male gaze throughout art history. Only a few women artists such as Artemisia Gentileschi, Frida Kahlo, Penny Slinger, Louise Bourgeois, Cindy Sherman, Francesca Woodman, Sarah Lucas, Lois Mailou Jones have subverted this idea of woman as her own muse through self-portraiture.

Agora Digital Art is thrilled to have Emma Shapiro as our resident artist in March and during the women’s month.

In our talk, on March 31st, we will have the opportunity to explore in-depth Shapiro’s series called Cuerpas, a poignant visual exploration of the self, the female body and empowerment of identity that can arise when a woman goes on the other side of the camera.

Starting last December at The Liminal gallery in Valencia, Spain; Cuerpas is an investigation of identity, ageism and body-representation. These works include repeated encounters mixing multi-media including self-portrait collages, videos, projections and performance elements.

In contrast to the male gaze, for Emma Shapiro, the act of filming is a physical work in which one is both seeing and being seen. Her performance works emphasise torment, discomfort, vulnerability and exposure as a constant search to create a new language that would differ, in a more nuanced manner, from those of our fathers or lovers.

Emma Shapiro’s work offers multiple frames of mind in the way she constructs her series of narratives about the evolving self. She layers the scene with photographs, cuts-out from her modelling years, then projects those rigid frames while performing. These performances install active relationships that call upon the attention of being in the moment like The Artist Is Present (2010) by Marina Abramovic, where the approach to subject and material is more emotional.

Those dematerialised performances shift as they are seen again and again. Perhaps to the point of possibly inducing false memories from watching the artist’s actions. Cuerpas induces self-reflection and tells much more about our state of mind. The viewer indirectly becomes the subject and the object of the work, Cuerpas acts like a two-way mirror of our mental state. In doing so, the work and Shapiro herself question not only our own memories, but the whole cultural construction of women psyche independently of cultural, gender or racial lens.

This exhibition is rated 18+

Agora Talk 20: Memory & Identity at the Border of Digital and Physical Art 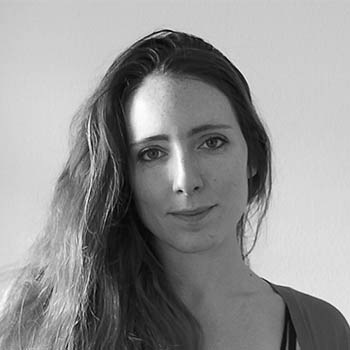 Emma Shapiro (b. 1988) is an American artist and feminist activist based in Valencia, Spain.

She holds a degree in Painting from The Rhode Island School of Design (’10) and has received multiple fellowships, awards, and residency opportunities to pursue her artistic and activist work. Upon completion of her degree, Emma pursued a professional career as an artists’ model in NYC for 5 years, an experience that deeply impacted her art practice and understanding of the body.

Through her use of layered video projection, self-portraiture, and repeated encounters with her own image, she deconstructs and questions the meaning of our bodies, how we know them, and what they could be. Her recent move from her native US to Europe has triggered a body of work concerning the memory of the self, and how we anchor our notion of the “self” in memories. Recently, Shapiro completed an Artist-In-Residence with The Liminal gallery in Valencia, Spain, during which time she explored this concept in the video-projection, book-making and photography.

My work is exploring identity, memory, ancestry and ephemerality by using my body as a primary tool. I seek to represent the human and female form as a timeless event, ephemeral yet fixed through genealogical and physical memory.

I see my body as a vessel for ancestral history – a link to family lost to anti-semitism and the Irish Famine – and thus a primal act of resistance against injustice, and a representation of hope.

My background as a professional art model allowed me to experience my own form as not only a subject but also a concept. Through my use of layered video projection, self-portraiture, and repeated encounters with my own image, I deconstruct and question the meaning of our bodies, how we know them, and what they could be.