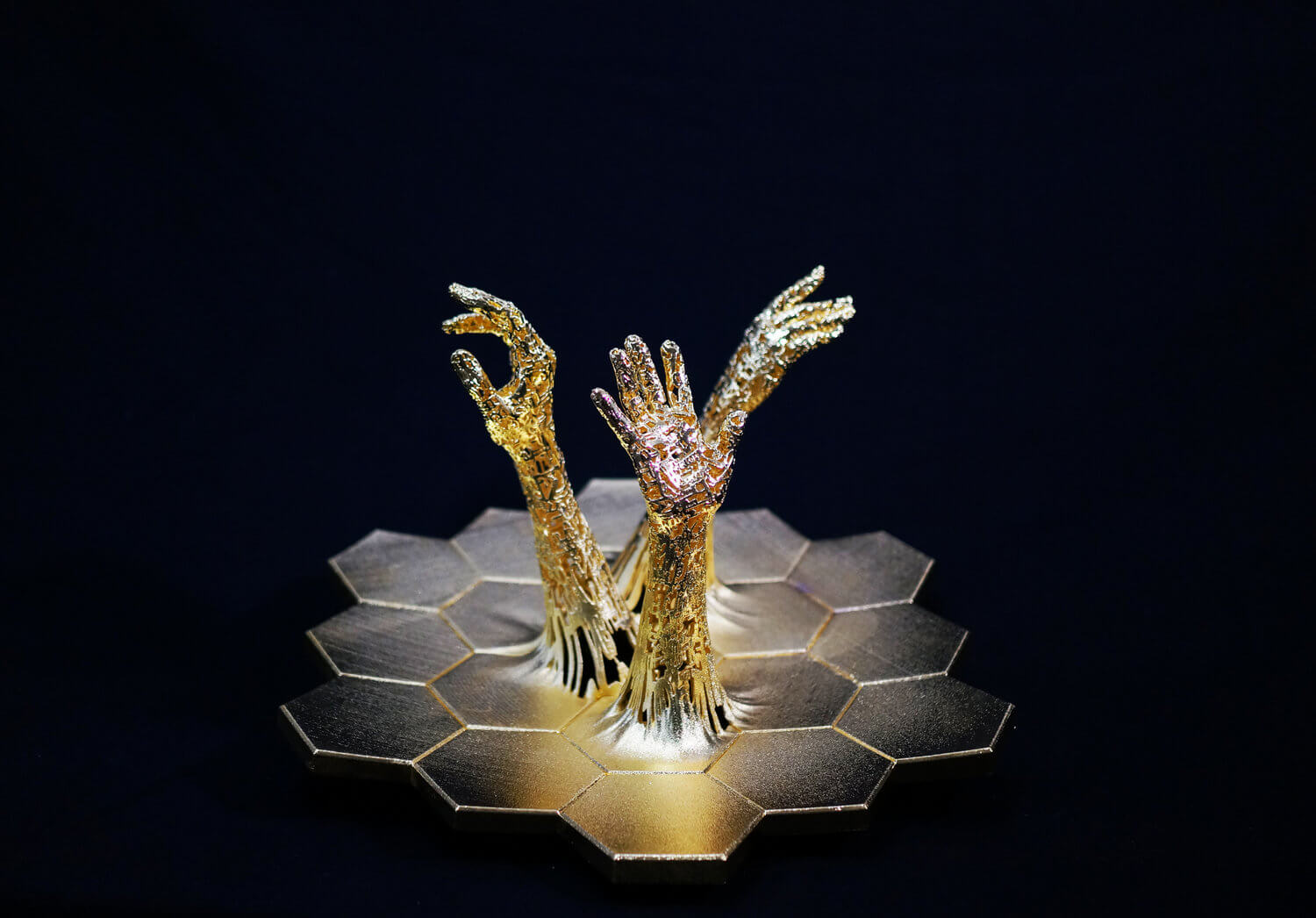 Exploration. The sole purpose of the James Webb Space Telescope mission. To look back in time and see how our universe was formed. To raise questions we never thought to ask. To reach into the unknown. Exploration was created using 3D scans of John Cromwell Mather, astrophysicist, cosmologist and Nobel Prize in Physics laureate and Amber Straughn Astrophysicist; Deputy Project Scientist for JWST Science Communications. The arms are reaching out of the primary mirror of the JWST as though they are reaching through a portal to the ends of the universe. As they push through they are enveloped in information, formulas that have helped unlock the secrets of the universe. The third arm is my own; the arm of an artist. The abstract idea of studying what you don’t know is hard to grasp. This is a disconnect that art can help fill in. Art asks people every day to think about abstract ideas and opens a doorway for creative thinking. My hope is to apply this open-mindedness to science and in this way be better equipped to take in the universe in all its vastness and mystery.

Now in 2021, the telescope will finally launch, a culmination of human achievement, and I would like to feature those humans that made it happen. NASA Goddard has once again asked me to create a work but this time commemorating the launch of the JWST in October. I have been interviewing scientists and engineers at NASA to get the scoop on what they worked on, how it affects the overall mission, their personal stories and emotions, and why this mission is so monumental. My work of art will be a testament to the humans that worked on this project for over a decade. I am still in the interview process with scientists and engineers. I have interviewed 12 people from thermal engineers and astrophysicists to exoplanet experts and astronomers. I am still uncertain what form the artwork will take. As a conceptual artist, I like to let the idea grow into an appropriate medium. I do have a ton of footage and would like to make a video of some sort. Perhaps projected onto a sculpture.

This is Zelinskie’s first NFT, released as part of Women’s History Month. The original life-sized sculpture subverts da Vinci’s ideal male form, the Vitruvian Man, by generating an idealized female form, comprised of many women Zelinskie has worked with, and 3D-scanned, over years: scientists, artists, performers and entrepreneurs. In using the genetic code of the XX chromosomes as a lattice for this composite form, Zelinksie has created a literal and figurative everywoman.

In addition to production through cutting-edge 3D-scanning, 3D-modeling and 3D-printing technology, Zelinskie collaborated with a geneticist to isolate the XX chromosomes into its “G”, “A”, “T” and “C” (guanine, adenine, thymine, cytosine) DNA components. Each pair of letters represents a bar in the double helix ladder of DNA.

Ink-washed images depict the first X-ray photography of the double helix by Rosalind Franklin, a female scientist, whose contributions to the discovery of the form of DNA were long overlooked. Franklin died of ovarian cancer, a consequence of the radiation from her research. Two men, Watson and Crick, were credited with her discovery.

“XX” is a homage to the women of science and, in a larger sense, to the long-overlooked achievements of women. Men and women share the same building blocks of life—the DNA that makes us and unites us as humans—and yet for much of the history of art and science, have not been recognized with equal dignity.

Ashley Zelinskie, One and One Chair (2014) © Courtesy of the artist.

Is an NFT a work of art? So many people have asked me this question this week.

In my view, the closest analogy is that you are buying a cryptographically secure provenance (the token), that is specifically linked to a digital file (in this case, an MP4 animation). As of now, the main NFT platforms only support JPEG, MP4, MP3, PNG, at least as far as I am aware. (Stay tuned I have something in the works with this one)

So the NFT is not the 3D print file, nor the sculpture itself (of course).

My plan for the future is to upload the 3D file (STL, OBJ) to the blockchain. Once this is possible I plan to include the NFT of the 3D file with the purchase of the actual physical sculpture as a package, which I think nicely combines the benefits of a physical object with digital cryptographic provenance.

To address this in the past I have kept files in a kind of “code escrow”. Big tech companies do this to protect their code should something happen. All my sculpture files are kept this way and in the case something happens to the physical object (Yes! It has happened to several collectors before!) I remake the work with the only catch being that the first object is returned to me to be completely destroyed. As you know, reproducibility is not a new issue in the art world!

This whole area is quite new and developing fast! As a digital artist, and a conceptual one too, have spent many hours thinking of this very question (see, e.g., my piece One and One Chair). I think there’s some interesting ideas to play with here, once you peel back some of the buzz.

For now, this is mostly an experiment at the edges of my existing practice, covering some of the same ideas. I am thinking of them as something akin to sketches or nice giclee print editions of a portfolio photo.

Digital Art for the Singularity: Coding the Essence of Humanity

How can humans hope to transmit our cultural heritage into the future when humanity’s entire existence is a mere blink of an eye on a cosmic time scale? What does this sense of scale—of the vastness of time and space—means for art? Utilizing a post-New Media approach, wherein the media employed are merely vehicles in service of underlying concepts, I am attempting the process of translating our vast history into a universal language meant to stand the test of time. By fabricating traditional objects in dual forms—as the classical entity and the data that represent them—my work seeks to focus a lens on our place as a small part of a larger whole. By drawing my inspiration from historical ideas and icons I am coding the essence of humanity into works of art—art for the singularity. 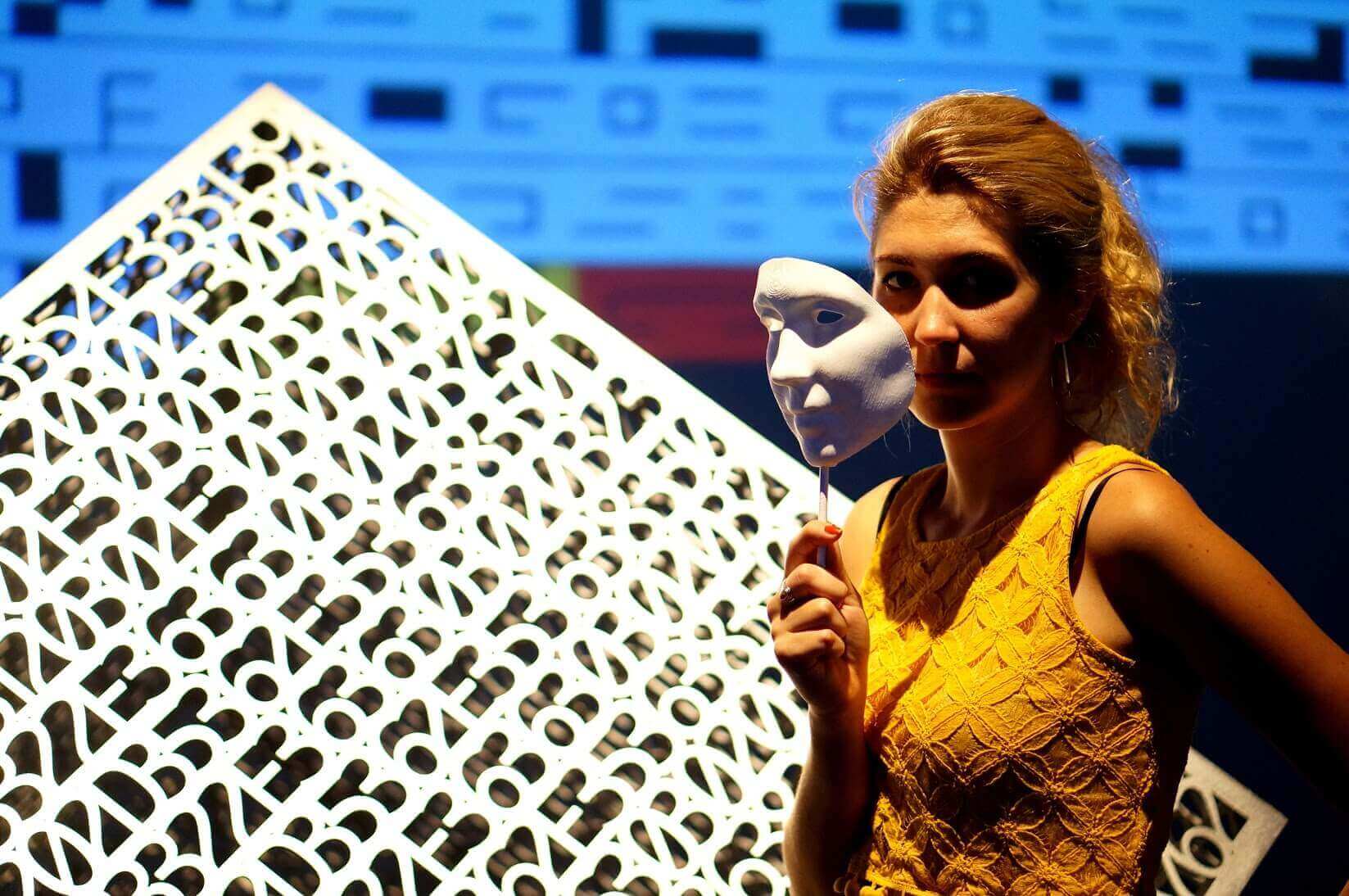 Ashley Zelinskie (b. 1987) is a Brooklyn-based conceptual artist working at the intersection of art, technology and mathematics.

Her works span a variety of media, from large- and small-scale sculpture to canvas and print works, each created using cutting edge technology such as 3D printing and computer-guided laser cutting.

Her work focuses on visualizing data in abstract forms and finding new and interesting ways to describe complex ideas.

Ashley’s work has been featured by Vice, Brooklyn Magazine, the New York Times and Hyperallergic. Her work forms part of the permanent collection of the US Department of State Art in Embassies Program and has recently been exhibited at Sotheby’s New York. Ashley is a former resident of New Inc.—the New Museum’s Art and Technology Incubator—and currently working in collaboration with NASA. She is a graduate of the Rhode Island School of Design.

How can humans hope to transmit our cultural heritage into the future when we ourselves are impermanent, alive for only seconds when compared to the lifetime of the universe? Utilizing a post-New Media approach, wherein the media employed are merely vehicles in service of underlying concepts, I am attempting the process of translating our vast history into a universal language meant to stand the test of time. By fabricating traditional objects in dual forms—as the classical entity and the data that represent them—my work seeks to focus a lens on our place as a small part of a larger whole.