Irem Çoban, Women in Proverbs series: A woman who has big buttocks is the favourite one like a food with sauce  (2020)  Turkish proverb © Courtesy of the artist.

Curator’s words: Women in Proverbs, Proverbs in the age of Digital Art

Wherever you are from and whichever language you speak, just think of a proverb that objectifies or disparages women. Most probably, you will come up with one, if not with many. The Digital Art exhibition Women in Proverbs provides a colourful criticism of the ways in which proverbs around the world depict women.

This year, Agora Digital Art’s artist in resident for the month of  September is İrem Çoban, a Turkish Digital Art artist and academic. Çoban’s art practice merges illustration, videography and cinema with a focus on gender studies. Through her work, Irem brings a critical visual narrative to the issues women face worldwide.

Socially constructed woman-identity is pushed upon people down through the generations as natural, and eventually, even women end up self-dictating these values and internalising them. When Simone de Beauvoir (1973, p.301) said “one is not born, but rather becomes, a woman”, she revealed the socio-cultural mechanisms that shape the woman-identity and the woman-being accordingly. When Judith Butler later conceptualised gender as performative, she, too, reminded that woman-being was not a biological phenomenon as taught to be so, but socially produced and reproduced constantly. Moreover, Butler (2015, p.28) questioned the role of language in making bodily acts performative, and she pointed out: “It is not an accident that God is generally credited with the first performative”. God supposedly created light and everything else that exists by simply speaking them into existence. Thus spoke Butler that “[t]he point is not only [that] the language acts, but that it acts powerfully”. Therefore, the utterance has the power to bring things into being or make things happen. As do the proverbs. They convince people from one generation to another to perceive certain things in a certain way by presenting their perceived truth as the truth.

With ideas circulating the world freely thanks to digitalisation, we see that such truths are relative to cultures. The end of the grand narratives brought the idea of universal truth, too, to an end. It is just as well that the collapse of the absolute truth opened a liberating space, especially for those exposed to systematic oppression in a culture, like women in patriarchal societies. This way, today, it is possible to deconstruct deeply rooted perceived truths of proverbs and the imposed values they convey about woman-being.

The changing faces of art, old as humanity, have evolved from ancient cave paintings to the Digital Arts of the contemporary world. Digital Art has unprecedentedly increased the power of visual communication with visual stories travelling around the world in seconds and joining the collective memory of humankind. Digital Arts have brought in the democratisation of artistic expression and let women who were once left out of art practice raise their voice and make themselves heard as they would like to be heard all around the world.

For this series, Çoban found inspiration in Mineke Schipper’s book Never Marry a Woman with Big Feet: Women in Proverbs from All Around the World which shows how common it is to devalue women in manifold ways worldwide. Initially created for the Turkish audience, Çoban’s illustrations incorporate the Turkish translation of the proverb she handles. In the digital sphere, from a perspective that is beyond culture, Çoban humorously visualises each proverb as it is told without any interpretation. This way, she shows how nonsensical and ridiculously funny these expressions are in the absence of the meanings that culture assigns to them. In the Turkish language, the proverbs represent the word of (male) ancestors. Starting from her native language, Çoban invites us to have fun with the way (male) ancestors saw women and with the outdated ideas of patriarchy.

In this exhibition, Çoban’s work is presented together with the proverbs in their original language, their English translation and cultural interpretation. This multi-cultural and multi-linguistic project is rooted in the communicative potential of both visual language and Digital Art, which connect people worldwide, beyond cultures, and offer new languages for new thoughts. While inviting us on a vivid visual journey through colourful illustrations full of cultural references, Çoban let the perceived truth of these proverbs that construct a disparaged or villain woman-identity get lost – not in translation – but in the infinite information of the digital age and the all-inclusive colourful pixel oceans of the Digital Arts.

For the opening of the exhibition, we had the pleasure in meeting the Turkish artist Irem Çoban and the digital curator Işıl Ezgi Çelik for a private tour of Women in Proverbs. It’s an ongoing project, so there will be new artwork coming soon. 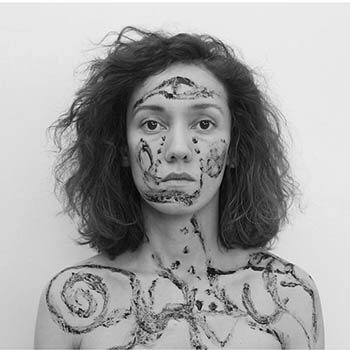 Irem Çoban (b. 1986) opted to take her Bachelor’s Degree at 1st rank and completed a Master’s Degree in Cinema at Galatasaray University at İstanbul, Turkey. She worked as a designer at Galatasaray University Design Workshop Unit and designed a lot of posters, magazines, and books. She has participated in group exhibitions, festivals, and workshops in various countries such as the USA, Japan, UK, Canada, Italy, South Korea, Bulgaria, Germany, and Turkey. In the Art Woman 2020 Geo-Graphies exhibition organized by Primo Piano LivingGallery in Lecce, Italy, she was awarded the best technical practice award and the Silver Certificate for her video “Tell me my future”. Her short film “Hear”, which experimentally handles the story of a child bride, has been selected for the official screening selections of various international film and art festivals. She completed her doctoral thesis at Maltepe University Fine Arts Department, Proficiency in Art. Her thesis was awarded the Doctorate Thesis Research About Gender Scholarship Award in March 2020 at the festival organized by Festiva Istanbul Culture and Art Association. She lives in Istanbul where she works as Assistant Professor in Digital Game Design Department at Doğuş University.

The artist has always found the clamped lives and crises that individuals go through in today’s ready lives interesting. In a society ruled by the patriarchal social order, social screams of the suppressed, namely women and different gender identities, are fought to be brought out the bad as it is a means of purification as well as an expression of their inner world. As long as the reality is concerned, it is always important to make the known but ignored visible to everyone. In this axis, she tries to embody the feelings that are internalized in the daily life practices, which also reflects the general views about life. Having used an interdisciplinary approach by using a combination of digital drawing, video, photography and motion graphics and generative art, she aims to convey the multidimensional character of the human that is inherent and to mirror all the dirty clothes stored in the most hidden attics of mind. She thinks that it is important to visualize and materialize internal energies with abstract forms. In her works focusing on gender and identity issues, she explores the representation phenomenon of feminist art. In this context, the problems developing in the axis of the climate crisis, on the other hand, the fact that violence against women has increased significantly in our social lives that are in quarantine due to the pandemic affect her works. As David Lynch has stated, there is a wonderful ocean of happiness and consciousness that the individual can reach by diving into himself. This ocean is the most important element to purify us.