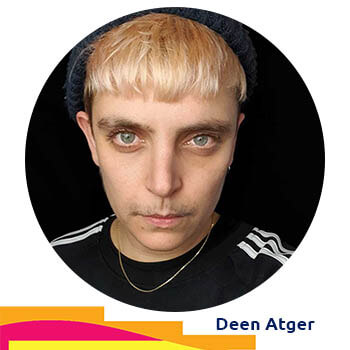 Deen are a trans-non binary curator and producer based in London. Their work focuses primarily on Contemporary and New Media Art exploring notions of identity, gender and technology.

They are currently leading the curation and programming at Ugly Duck, and curator and producer of @Disturbance.

In parallel, they are also involved with Kallida Music Festival, Agora Digital Art and East African Soul Train. They are one of the trustees of the organisation Gut’s level in Sheffield, a queer led DIY event space and collective, focusing on dance music and club culture.

In our technological landscape, what is left of our ideas of the Sublime and Beautiful as conceptualised by Edmund Burke in 1757? Has the virtual enhanced our conception of the sublime? How can this idea be translated into the metaverse?

In this virtual reality exhibition, we have selected 11 international new media artists – all identifying as women and non-binary. The presented 14 artworks investigate the question of transcendental beauty through concepts associated with the body, nature, cyberspace and different realities.

From hyper elegance to delightful horror, this collection exists in a place in between worlds where everything seems possible.

You are invited to wander in the virtual gallery, during your visit you will encounter 3D artworks, videos, stills and digital sculptures, divided into four different rooms. Each artwork can lead you to additional interactive web-art zones, immersive worlds or an NFT marketplace.

Our first room looks at the concept of dis/embodiment with works that dissect, magnify and deconstruct digital bodies. Wes Viz in Linear Interpolation 1 playfully explores the in-between spaces of movement and the constant flux that occurs even in stillness. Maria Judova in her intermedia piece Everywhen explores the interplay of light and dark within each of us and its relationship to those around us and wider historical patterns that have a tendency to recurrence.  In Victory, Valentina Ferrandes offers a computational exploration of the algorithmic un- or making of the marble Hellenistic sculpture “Nike of Samothrace”.

Three gardens are on display in the Cyber Sublime. The video version of Privacy-GrDN by the artist S4ra and in Realness – Intimate Garden by Sandrine Deumier questions the role of surveillance in our lives, the relationship between surveillance and capitalism, and the implications of these for control of our digital intimacy. These works offer distinct aesthetics, both offering visions of a mutant nature. In Linda Loh’s Beyond Agog 2, fleeting encounters and shifting views present precarious moments of clarity between the elusive and ephemeral realms. The pieces dialogue with each other making us the witness of the modern, exalted pursuit of a technological sublime.

While you continue your virtual promenade, you will encounter Sian Fan’s Spore 1 and its computer-generated textures, produced by photogrammetric scans of plants and flowers to create a sense of sublime tranquillity. Rebeka Guo with Being in a Sandstorm, and award film-winner, Dalena Tran’s Incomplete also investigate the link between the natural and the technological. After all, isn’t all technology based on models and processes found in nature?

The last room is a proposition around the feeling of eeriness that can be found in the works of Nicoleta Mures’ characters. With Best Hug and What isn’t There?, the meta world seeks and acts on things that we seem to know but without making any sense. Finally, Bolim Jeon translates brilliantly the strange feeling of being alone in a crowd and the only one to notice strange things happening in her 3D artwork In the Belly of a Whale.

Embark on a journey in the pursuit of the transcendent and shake, disrupt and re-invent with the presented artists who give a new meaning to grandiosity, beauty and the sublime.

Palestinian voices in the arts

How do Palestinians express their identity and explore connections to their homeland through art? Deen Atger  |  Ed [...]

What Is at Stake in Jake Elwes’ Work of Queering AI?

New Media artwork, The Zizi Show by artist Jake Elwes is a deep fake drag show and the first-ever [...]