Is there a perfect algorithm for creating Digital Art? Artificial intelligence bot Ai-Da presents self-portraits, sculpture and more in her London Gallery Show. 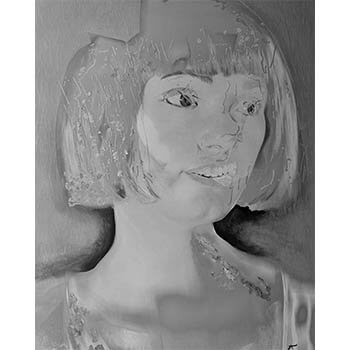 Ai-Da, the world’s first ‘ultra-realistic humanoid artist’ was created two years ago, the brainchild of gallery director and commercial collector Aidan Meller. Ai-Da, named after the pioneering computer programmer Ada Lovelace, produces artwork using an algorithm developed by Oxford University mathematicians. First appearing in a solo show at John Harvard College, Oxford, two years ago, Ai-Da is a digital artwork in her own right, with a face designed using Mesmer technology by Engineered Arts UK. She works in a variety of traditional and New Media, using her robotic arm to create and collaborate on drawings, paintings, 3-D modelled sculptures and video capture. Not afraid of controversy, her work asks viewers to contemplate the potential of machine learning in the creative industry.

Ai-Da Portrait of the Robot at The Design Museum, London until 29 August 21.

Ai-Da: Portrait of the Robot opens on Tuesday 18th May 2021. @designmuseum

Ai-Da’s latest portrait series is on display in London until the end of August, exploring the relationship between humans and machines and the implications of living our lives surrounded by digital profiles and images. Ai-Da continues to make worldwide appearances, and we can expect her to keep pushing boundaries as she explores the divide between organic and inorganic life and our growing reliance on machine learning.

Ai-Da’s robotic arm was designed by engineers at the University of Leeds and enables her to put pencil to paper to produce a signature style of shaky, geometric drawings. She cannot paint yet. In a practise time-honoured since the days of Leonardo da Vinci, she enlists the help of others to complete her output, collaborating with artist Susie Emery to finish her drawings, adding colour and sculptural forms in paint.

Ai-Da’s series of sculptural works are based on her impressions of bees, using her digital eyes to map out coordinates, their imperfect lines offering a lively appearance. The bees were the main attraction of the 2020 exhibition hosted by Annka Kulty’s Gallery: Do Robots Dream of Electric Bees (a play on the celebrated Philip K Dick novel that inspired Blade Runner). Looking at the expressive, energetic sculptures, you might not believe a robot had drawn them, they look as if they are whirring and catching the bees mid-flight. The bees’ wings rotate in rapid motion, reminding observers of artists like Marcel DuChamp who captured the mechanics of movement.

Ai-Da draws the bee forms before handing them to a digital artist who maps them out onto a 3D form, printed in wax before being cast over in bronze. These digitally rendered bees carefully tread the lines between organic and artificial. The works are inspired by computer programming algorithms that model food-foraging techniques of honey bees to create communication between a network of computers.

Ai-Da’s work reminds us that intelligence isn’t always the quality of an individual genius but can be a community working together within a hive-mind. Illustrating the robotic efficiency of nature, bees are a perfect example of the overlap between artificial and ‘real’ intelligence. According to her Instagram page, Ai-Da wants to provoke discussions about protecting our natural world while we make digital advancements. With unprecedented falls in bee populations becoming a global problem, Ai-Da’s sculpture draws attention to technology’s close relationship to nature and asks us to consider how they could work in harmony.

Using the camera located in her eyes. Ai-Da digitally draws her work by observing the world around her and plotting out coordinates. In her most recent series, she has turned this gaze back on herself, in a process time-honoured by artists: the portrait. Is a computer really capable of this kind of introspection? Meller wants to provoke debate about the potential of AI in the art world, asking if you can make a self-portrait without a self?

Ai-Da’s algorithm is carefully designed to not be perfectly realistic, rather developing a signature style for the artist, using expressionistic lines to create a fractured style. The kaleidoscopic forms are then hand-painted over by an artist, while Ai-Da adds final touches with mark-making. The neon and pastel-coloured, slightly off-centre images have a glitch-like aesthetic. They are reminiscent of feminist artworks that use computer imperfections to question the boundaries we place around our bodies, dividing humans and machines, males and females.

Ai-Da has been subject to her fair share of sexual objectification, being referred to in The Times as “Brigitte Bardot in a brunette wig”. ArtNET  has questioned Ai-Da’s ‘attractive’ appearance, accusing her creators of deliberately producing a “sexy fembot” earlier this year. The shattered self-portraits are slightly reticent, denying the viewer total access to her image as they stare into the fragmented forms. Could they be a critical glance at modern femininity and self-hood, an effort to deny the masculine gaze by breaking up the feminine form? Perhaps, but it’s unlikely. Ai-Da is not capable of this level of self-awareness yet; she simply sees the world and reproduces it.

Ai-Da’s portraits have proved polarising, with The Telegraph referring to them as ‘formulaic” and lacking expression. The spontaneity and authentic emotion that we associate with art, arguably cannot be recreated with an algorithm and this could leave viewers underwhelmed.

However, whether the opinion is positive or negative, if people are discussing the implications of asking a computer to digitally produce portraits, this is intentional. Her creators tell TIME magazine that the point of Ai-Da’s display is to question the ‘uses and abuses’ of machine learning. In our current culture of image obsession, with selfie-cams, photo retouches, AI fakes and cosmetic enhancements becoming increasingly prevalent, we are asked to contemplate the potential and the risks of living through our online personas.

This New Media work demonstrates Ai-Da’s goals to put her artificial intelligence in service of current environmental debates. Ai-Da first conducted Privacy in front of a live audience in Oxford, recording using a one-channel video. It pays homage to revolutionary 20th-century artist Yoko Ono, whose ground-breaking Cut Piece debuted in 1960’s New York and has since been reprised in Tokyo, London and Paris.

Ono invited her audience to come up with scissors and cut a piece of her clothing away from her body as a souvenir to take away. Ai-Da’s piece adopts Ono’s participatory tactics but reverses them, asking her audience instead to cover and clothe her robotic ‘body’ with scraps of recycled cloth. Re-using fabrics emit a different message to the original, commenting on the wastefulness of contemporary culture. Ono wished to comment on the ethics of giving in the arts and the limitations imposed by artists on what they offered out to viewers. Instead of inviting the audience to take as much as they like, Ai-Da invites her viewer to be careful of their consumption, reversing the notion of giving.

Critics’ have long debated the provocative ideas of the feminine body, concealment and identity provoked by Ono’s Cut Piece. Ono relied on her audience reaction and daring to construct the performance, offering playful unpredictability. Ono’s audience faced the moral dilemma of cutting away fabrics and revealing the body leaving the artist vulnerable. Ai-Da’s piece once again asks the audience to interact, creating a spontaneous element to the computerised artist’s work. Sexual identity and modesty take on a different meaning when applied to a ‘humanoid’, presenting a new twist on issues of feminine embodiment and display.

Ai-Da has been part of digital art exhibits across Europe and Asia, including displays at the Tate Modern, Barbican and Ars Electronica. In 2019, Ai-Da collaborated on a series of TATE exchange funded workshops, with UK artist Sadie Clayton exploring the confluence of technology, art and identity. She is due to reunite with Sadie for a Microsoft workshop, exploring the potential of females in New Media art. Ai-Da has even taken to the stage to inspire others with her own TEDx Talk, on the intersection between art and AI.

2021, Ai-Da Portrait of the Robot at The Design Museum,

2019, Out of the Box-Ars Electronica Festival, POSTCITY, Linz.