Lu Yang is a multimedia artist driven by the desire to explore her own gender nonconformity alongside big topics such as neuroscience and religion. She often expresses her ideas through playful digital lense resembling video games populated with gaudy, anime-inspired characters. 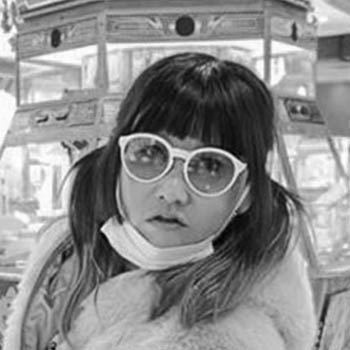 Born in Shanghai in 1984, Lu Yang grew up with Buddhist grandparents and was absorbed by Japanese otaku culture — video game and manga fandom. Lu went on to graduate with Bachelor’s and Master’s degrees from the New Media department of the China Academy of Art in Hangzhou. There she studied under Zhang Peili, a Chinese contemporary artist who mainly works in video. Fascinated by digital media, Lu started creating extravagant animations which explored the ability of neuroscience and medical technology as a means of documenting emotional, religious and philosophical phenomena.

Over the years Lu has produced a whole host of immersive multimedia projects that are widely provocative and often touch upon morbid themes. She frequently adopts a video game aesthetic,  intertwined with references to anime, sci-fi, and popular culture. Some of her most notable projects include Kimo Kawa Cancer Baby (2014), Uterus Man (2013), and Wrathful King Kong Core (2011), often in collaboration with performers, designers, experimental composers and controversial figures.

Lu Yang’s upcoming exhibition ‘Doku – Digital Alaya’ will be on view at the Jane Lombard Gallery in New York from the 23rd of April – 12th June 2021.

Lu Yang is constantly developing her production methods, often using new technologies such as holograms, VR and software manipulation. Her video game performances have been created using the highly complex technology regularly used by Hollywood animators, who often employ the labour of multiple animation firms. However, Lu prefers to craft without assistants, making her work even more compelling.

Lu also believes that most contemporary Chinese artists are barely scratching the surface in their engagement with technology. She believes this is down to the lack of opportunities for artists to collaborate with scientific facilities in China. This has driven her to create immersive multimedia projects that push the limits of working creatively with technology.

In 2019 Lu was the winner of the BMW Art Journey, a global initiative created in collaboration with Art Basel which recognises and supports emerging artists. Lu’s contribution, Human Machine Reverse Motion Capture Project, is concerned with how the human body can be trained to overcome physical limitations. Using the latest digital technologies, Lu explored the human mimicry of robots by recording contemporary dancing practices in Indonesia, India and Japan.

Lu was also joined by renowned Japanese dancer kEnkEn. She managed to record his facial and body gestures and also capture a dance battle he initiated with local dancers on the doorsteps of a religious temple. Lu strives to reflect these moments in her final documentary. For the time being, Lu is preparing for the second part of her trip to Kerala, India. There she aims to capture the facial and eye movements of Kathakali dancers, revealing their resemblance to the workings of sensors and motors in advanced humanoid robotics.

In 2012 Lu made her first avatar known as ‘Uterus Man’, an anime-style asexual superhero whose body resembles the silhouette of a uterus and is equipped with multiple weapons including a sanitary-pad skateboard. Revealed through an 11-minute CGI montage resembling a video game trailer, the male-looking character draws upon superpowers from the female reproductive organ.

Uterus Man was originally modelled on the Japanese performance artist and activist Mao Sugiyama who had his genitals and nipples surgically removed in 2012 to promote gender nonconformity. Lu’s science-fiction-come sexual-anatomy-animation also offered a powerful alternative to gender normality during a period of increasingly heteronormativity within Asia. Although queer awareness and understanding have developed significantly over the past eight years, especially in parts of the West, Uterus Man remains a modern-day hero that aims to help contribute to society’s ability to digest gender nonconformity.

In 2015 Yang took her interest in gender identity one step further, digitally reconstructing herself as a sexless test subject for a series of neurological experiments in the animation ‘Lu Yang Delusional Mandala’. The film begins with Yang scanning herself with a 3-D printer to create a gender-neutral avatar. The clone then dances to upbeat techno music whilst being probed by machines. The avatar also dies and comes to life multiple times throughout the 16-minute long video, being reincarnated into Buddhist-like figures. In the final few seconds, an MRI machine sends the avatar’s body into a crematorium removed by a hearse, manically smiling while carried away.

Although many artists address the issue of mortality, Yang’s take is nothing less than extreme. By replacing her body with numerous immortal representations the artist has been able to demonstrate the potential of digital and mechanical reproduction as a means of overcoming the limitations of tangible life. Lu also grounded this theory within the domain of Tibetan Buddhism and used graphics similar to the Japanese anime/video game subculture.

Lu Yang, Delusional World (2020) in @acmionline ‘s new online gallery. ⁣
The work is streamed from @chronus_art_center in Shanghai as part of @asiatopa
The piece was commissioned by ACMI, @artscentremelbourne, Asia TOPA and Exhibitionist and was developed in collaboration with Chronus Art Centre, @metaobjects and curator Mathew Spisbah.⁣

The 1975 and Ben Ditto have curated an online exhibition of 14 artists responding to tracks from ‘NOACF’. 15 Lu Yang responded to ‘Playing On My Mind’. © Courtesy of the artists.

In May 2020 English pop-rock band The 1975 released their fourth studio album ‘Notes On A Conditional Form’. To accompany their release the band commissioned several artists, including Lu Yang, to produce artwork in response to the tracks on the album. The artists had complete creative control as the band was inspired by society’s increasing dependence on technology and wanted to highlight the positive aspects of embracing new digital media.

Yang’s video submission featured her nonbinary digital alter-ego Doku, short for Dokusho Dokushi which means ‘you are born alone and you die alone’ in Chinese and is also a reference taken from a Buddhist sutra (ancient and medieval text). Lu constructed Doku using the latest 3D scanning, digitally modelling 50 of her facial expressions with the help of Facegood, a Shenzhen-based studio that uses motion capture technology to create digital animations.

The majority of the video shows Doku in an empty digital arena, with a chest inset with glowing lights and hands producing purple after images whilst dancing and miming the song. Doku’s dance moves were produced using animation programs, such as MikuMikuDance, which she mastered whilst studying in China. In recent months Doku has taken on the persona of a celebrity, adopting a personal clothing stylist and tattoo artist, and is in the process of teaming up with Li-Ning, a Chinese sports brand.

Yang continues to evolve Doku’s aesthetic, as CGI requires constant development, but also because she considers Doku as her digital reincarnation. The process allowed Lu to create a gender-neutral body helping her to establish a greater sense of identity. Doku demonstrates that the world of digital creation is a space where understanding and empathy are in abundance, liberating ourselves from the rigid confines of gender, race, and sexuality.